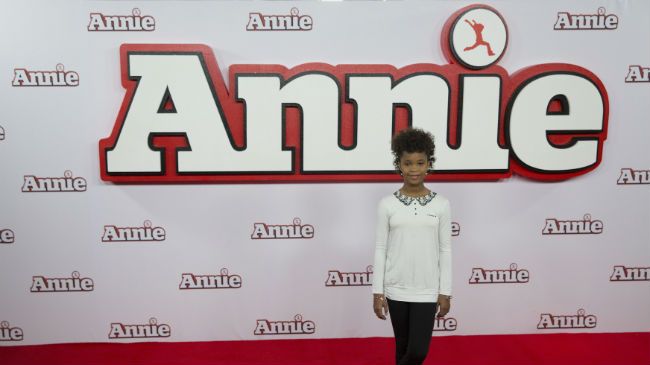 Unless you have been living under a rock, you know that the new “Annie” is portrayed an adorable little black girl rocking natural hair.

This pint size cutie is also an Oscar nominee for 2012s Beasts of the Southern Wild. In fact, she’s the first African American child actor to be honored with the Oscar nomination. She is also the winner of 2012s Critics Choice Award for “Best Young Performer.”

Roughly one year later, it was the delight of many to hear the news that Quvenzhané knocked down yet another barrier in the industry. She had been pegged to portray Annie in the new film version of the classic musical (historically played by a red headed caucasian girl with a red afro). The film also stars Jamie Fox, portraying the “Daddy Warbucks” character.

Hair is a big symbol in this movie.

Historically, the big red hair that this character wears was made to represent the unkempt nature of her life, having been a foster child with a less than enthusiastic and nurturing foster parent. The same goes with this version of the film. Quvenzhané’s “Annie” is on her own in every way. Her foster mother cynically, even mocks her “big hair” as if it’s a bad thing—oh if she only knew, big hair, is good hair—but I digress, sure her hair is disheveled at times, after all, she is a foster child. That is a part of the role she plays--unkempt, disheveled. Still, it’s charming to see a character whose hair represents more than its characters’ actual needs. It represents so much more, culturally, in America where many as still adverse to African American natural hair.

In a time where bone straight hair is so highly represented, her hair makes a statement. It is always refreshing to see curly, coily, and free hair in a major movie...Her hair gave her character that let her personality shine through.

I am not a parent just yet, but I can imagine being happy to have this character be seen by my imaginary daughter. Someone, who hypothetically would probably have similar hair. With straight hair Barbie’s and dolls abound, I imagine, straight hair and embracing their own natural hair could be confusing for a little girl.

Everyone wants what they do not have—young and old.

Many people with beautiful curly hair want to wear it straight while others appreciate the gap that the Annie movie has helped fill for little curly girls of all races--and even some adults.

People do what they see, they mimic celebrities, and with more of them embracing the natural look, even part of the time, and with characters such as Quvenzhané’s “Annie”, it will only fuel the ongoing shift of people wearing their hair natural more and more. There’s a part in the film where Annie looks up at a billboard and says: “Wow, my hair is huge!” It may be “huge” but you know what? It’s fabulous--not just the hair itself, but what it represents to such a diverse audience.  Sure, we can make our hair straight, or we can choose to rock it our way--curly, coily, kinky, big. It’s perfect just the way it is.