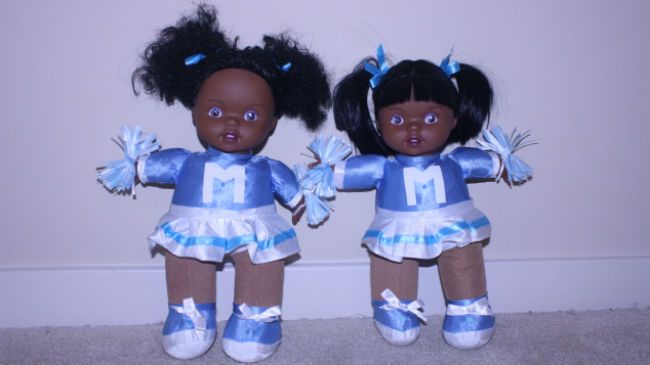 When I did the Black Doll Test last year, I already knew what the outcome was going to be. Why? The same issues within the black community that existed when Dr. Kenneth and Mamie Clark performed the doll test in 1939 still exist today. During my Natural Hair Doll Experiment on YouTube, the majority of the children chose the straight-haired doll over the kinky-haired doll. I asked the handful of children that chose the kinky, curly-haired doll why they chose that doll and one boy stated,  "it looks like my mama's hair" and the other children had similar answers. This leads me to believe that if a children see that something is acceptable and beautiful due to the influence of their parents, they are likely to share the same sentiment.

Society is always going to have influence, but it is up to the parents to reverse the brainwashing that children get from television, magazines, and the ideals of their friends. Friends can be the absolute worst sometimes. Oftentimes young girls will try to fit the ideal of what their male counterparts deem attractive. Not only do children watch what we do, but they also listen to what we say so always be mindful of your words; even when you're in another room on the phone and you don't think your children are listening. Saying “her hair is so nappy” or “he is too black” with a tone of disgust will teach them that those characteristics aren't desirable. If a child has features remotely close to what you've deemed unattractive, they will grow up self-conscious about them. Reversing society's conditioning is a hefty task, but someone's got to do it.

Children absorb everything and it is everyone’s responsibility to build up the self-esteem of youth, not solely the parents. Your words have influence as well. Everyone needs to be mindful of what we say to and amongst adolescents. The worst thing to do is a tease child about a feature that society says isn’t beautiful or give them a nickname relating to it. If you grew up in the Black community, I'm sure you've heard Black "insert first name here" as a nickname. Imagine if you thought being dark-skinned was unattractive and your nickname was Black Ashley. Every time you heard that name you would feel as if they were saying Ugly Ashley. Now, some people view these as terms of endearment. Growing up, my grandfather nicknamed me Soot, but it didn't affect me until I got older. My brothers would tease me and it made me feel self-conscious and insecure. I began to ask myself if I was too dark.

At some point we have all either made a joke, laughed at one, or unconsciously perpetuated self-hate in the black community. I think if we all made an effort to speak positively about natural hair and skin color, the results of tests like this can be the opposite. It is up to everyone to do his and her part. Stop a little girl with a wild, messy afro and let her know her hair is gorgeous. Tell a boy with chocolate-hued skin that his complexion is the most beautiful you've ever seen. One statement can live with a person forever.

Oprah said that the first time she felt beautiful was when a politician's wife approached her in a crowd and told her she was cute. I think fabulous women don't know the power of their words. If you tell an insecure teen who just big chopped that her hair is dope, maybe she will start to believe it and become more comfortable in her skin. Mother Theresa said it best, "...words can be short and easy to speak, but their echoes are truly endless."

View the Chime's Natural Hair Doll Test below and share your thoughts.