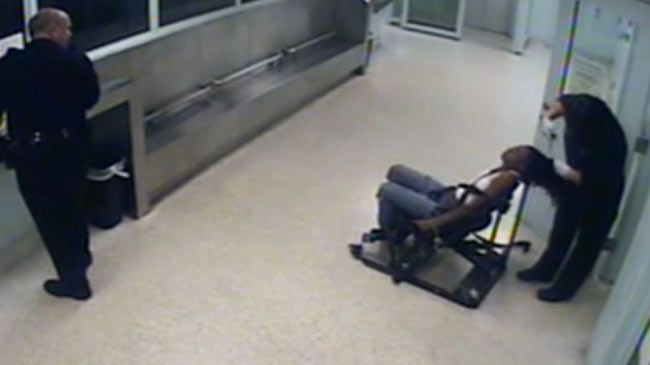 I’m still disturbed by the incident that occurred on Nov. 13, 2013. Charda Gregory, a black hairdresser in Detroit, had her sew-in weave cut and ripped from her scalp during an arrest by Warren Police Officer Bernadette Najor while the other officers strapped her to a chair and watched. The video of the incident went viral and Najor has since been terminated and arrested while the other officers are currently under investigation for their actions (or lack thereof) during the confrontation.

It started with Gregory being arrested for being combative in a local motel, but by the time she was in the police station she was calm. Although she was visibly intoxicated or under the influence of something, she did not resist any of the officers while in custody. After being pushed by white female officer, Bernadette Najor—a 10-year police veteran, her fellow officer dragged Gregory to the restraining chair and Najor forcibly cut and ripped the weave out of Gregory’s hair. It was all caught on a non-audio tape and Gregory is clearly in agony from the assault.

My fury concerning this affliction to a fellow black woman is justified. This would not have happened to a white woman. Because we have a black president, people are under the misconception that racism no longer exists, but that only triggered certain behaviors to become subtler. The brutality that Gregory endured was not subtle and the intentions to strip this woman of her pride and respect were seemingly apparent. Our hair is more than a superficial accessory, and whether we buy it or grow it means nothing and is totally irrelevant to the fact that violently stripping a woman resounds with hatred, ugliness, and is repulsively demeaning.

As the natural hair movement has grown in popularity and acceptance, there is a real concern for some who feel intimidated by our hair choices and styles. Not all black women are wearing their natural hair but we are all black and some misguided individuals may neither be able to tell the difference nor care to. What is a better way to strip another woman of her unique beauty than by removing what is symbolic of her femininity, grace, and heritage? What better way to assert your temporary dominance and control than with traumatic acts? For a woman to take such drastic measures to batter and humiliate another woman of a different race shows the lack of acceptance, empathy, and a nuance of a superiority complex.

I know the endless accusations of racism, sexism, and ageism are becoming trite but just because some may neither see nor feel it does not mean it is eradicated. One does not have to see oxygen to know it exists, and as someone who has faced the subtle sting of racism, I can assure you that this was everything but a mistake. The incident may seem odd but this is no anomaly just because news stations decide to cover it. The message is clear; there are many who feel that black women are not on equal footing as a white woman and are not entitled to human dignity. Make no mistake in seeing this as an isolated incident and the officer felt she over-stepped her boundaries. Her boundaries were to protect and serve, not to humiliate and dismember a part of her body.

Sometimes hair is more than a superficial, aesthetic accent and sometimes the message is subtle yet ever so clear. Taking the right to a person’s body (whatever part it may be) is to take a part of his or her existence. My hair is a symbol of my blackness that I take pride in and hold dear to my heart. I may not know Charda Gregory, but I know she would feel the same.