Afropunk Surprised Me! Here's How...

You know what's great? Staying inside. Even when I'm outside, I do my best to stay inside. 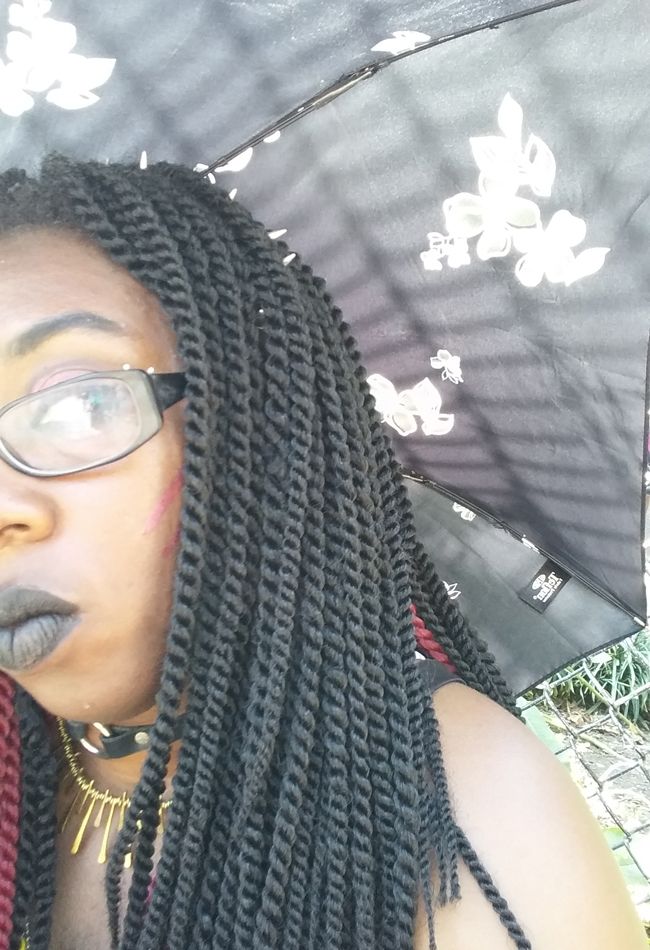 It's me and my parasol against the world.

However...I do like doing dramatic, weird stuff with my makeup.

I'm the kind of chick that practically has to charter a bus for every trip in order to have everything I need, but surprises are unavoidable until the day we step out of this life. And at Afropunk, there were surprises aplenty!

Here's what caught me off guard—for better and for worse!

Who comes to a gathering of artists and creatives to NOT be in awe of what people can do with when thoughts spring forth into the world? "Not I," said the April.

But what I didn't expect was that I'd be more drawn to the subversively soft looks on display! I was super feeling the hyper feminine motifs like flowers, velvet, and pearls combined with Afro-centrism, far out body adornment, and...well...some sexiness. A lot of sexiness actually. I wasn't ready.

These four fine femmes really got me feeling the ways traditionally lady-like staples could be incorporated into looks that I could really feel on myself! Check out their Afropunk presence, and their IG presences! 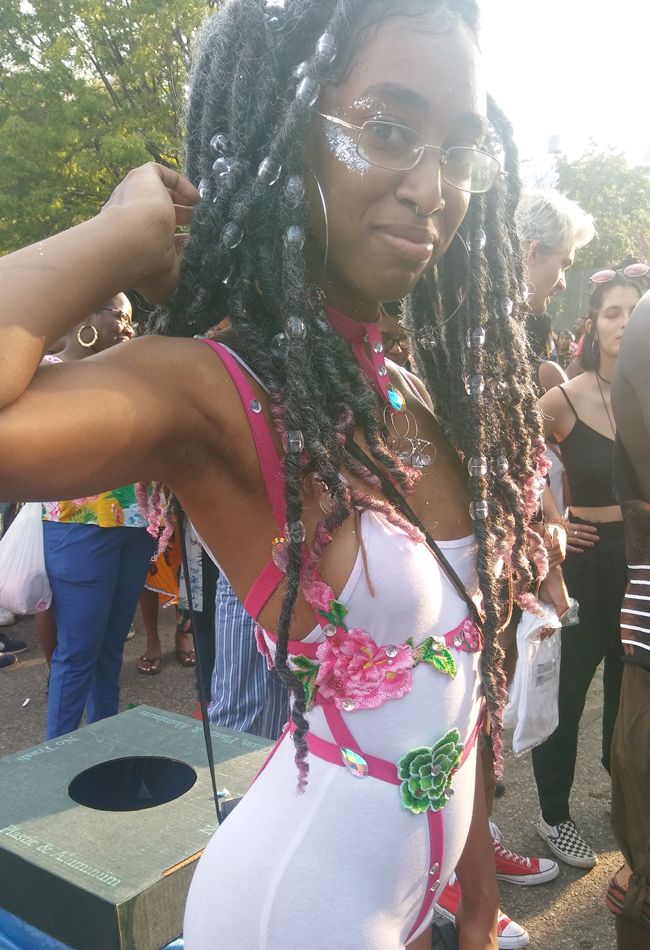 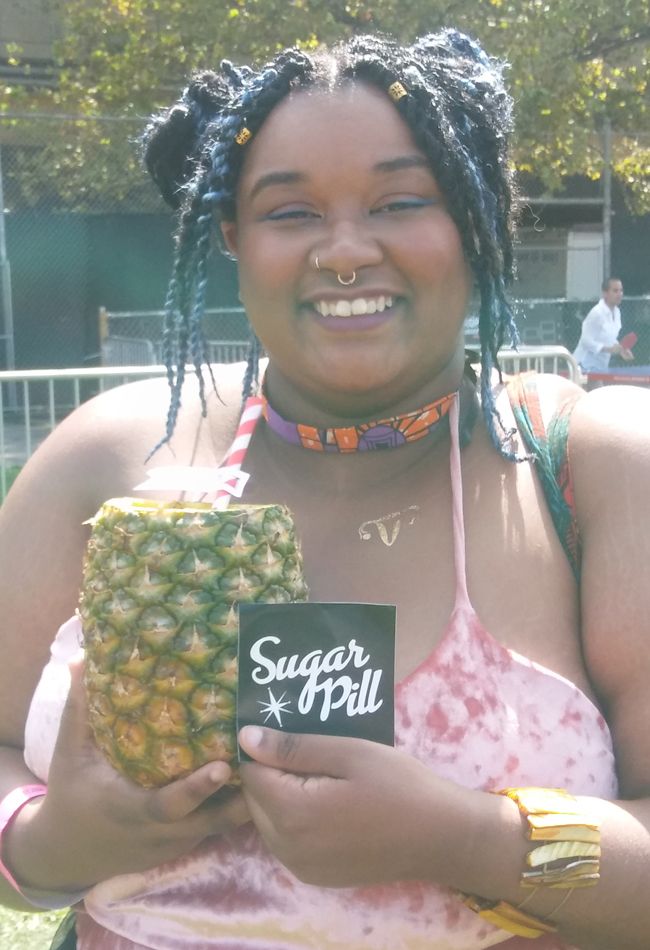 (Also, she's holding the sticker of a pretty great band...) 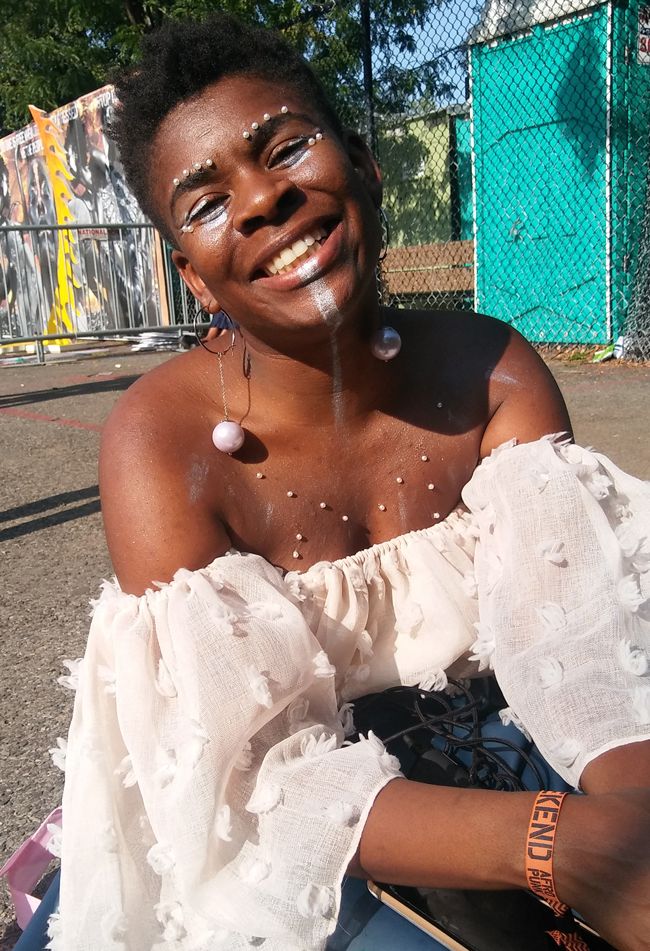 Pearl cabochons though? HOW HAVE I NEVER DONE THIS? I see the light! 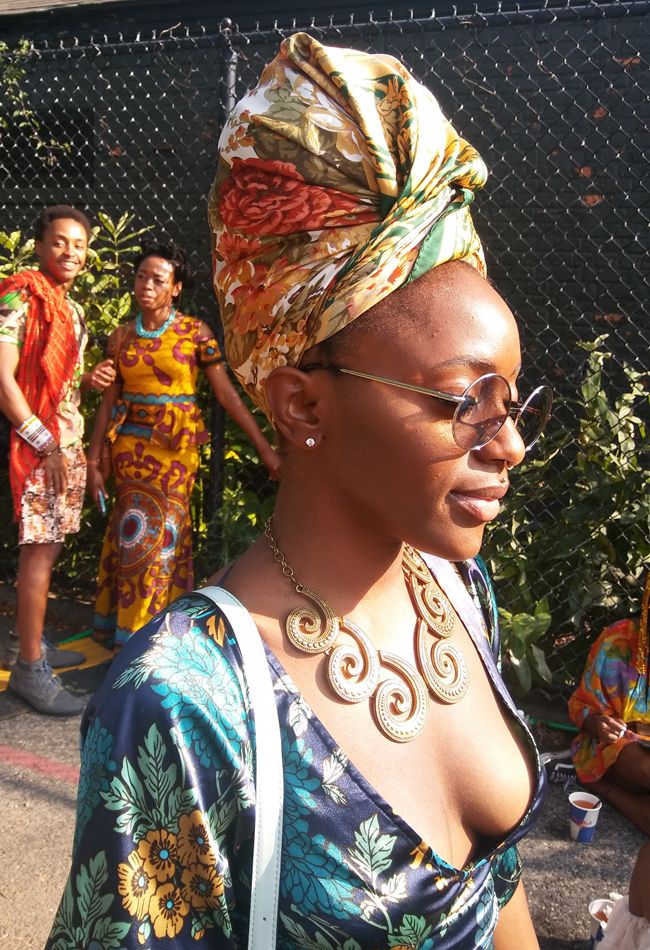 Antique florals...but in a headwrap! Way to make it your own!

That's some good stuff right there, now I have to get myself to a Jo'Anns Fabrics...

I'm not a parent. I love kids, but I'm good with just being a weird Auntie. I could never inflict living with me on an innocent child, that's just cruel. I say all that to drive home the point that I'm sure there's a perspective I don't quite have on why anyone would bring their child to Afropunk, but it was a shock nonetheless. I'm not saying there was any illegal activity going on, but I will say that I needed to stretch both hands in front of my face to get out of the haze over the Gold Stage safely, okay. Artists and performers were there in all their uncensored glory, both lyrical and physical, the crowds were huge and tightly packed, the food was priced befitting a seller's market, and um...there were bag size restrictions and a strict no re-entry policy. Yet I saw strollers, little bitty afro-puffed youths, and even a tiny pale bean in one of those Bjorn carriers with giant noise cancellers on its still soft wee head. Definitely didn't see them coming, but hey, it's not up to me to judge. Their family's there for them, and they're our future! I just hope the future has a cure for early-onset tinnitus...

Don't start, it's actually not even what you think.

I gotta take a hard stance on something here—cultural appropriation of other cultures perpetrated by black people, especially of other POC is straight up odious. It's no easy thing to stop the prejudices we hold towards each other, and it's going to be a lot of large and small acts over time to get us all out from under the systems we have to fight against. But that's no call to just do as you please with others' regalia. When I see a gathering of black people celebrating our rich culture, what we're doing today and what we'll be doing in the future, our art, our activism, et cetera? I expect that ish to just be OUR culture. Seeing a black man in a Plains style war bonnet replica made me cringe hard enough to leave bruises, and there's good reason. When we get up for festivals it's about black excellence. Black creativity. Not theft. Not style plagiarism. Not appropriation. And if that gentleman happens to be reading—dude...c'mon now. Course correct, please. 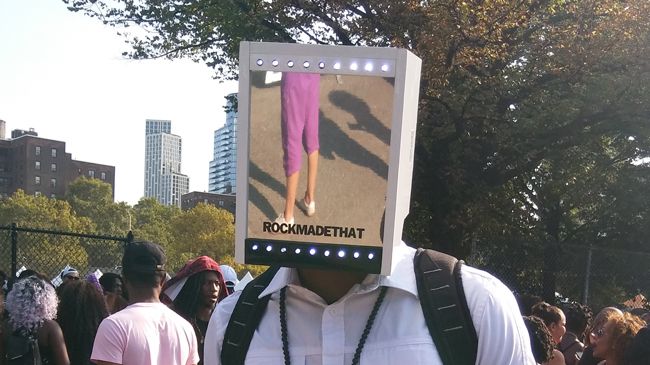 Find this dude and take a good hard look at yourself.

Disclaimer, of course black Native Americans exist. Interracial mingling is a thing. A great thing when there's love and respect there. But considering the strict circumstances under which these headdresses are bestowed, do y'all really think someone was wearing it with the appropriate reverence in a crowd of sweaty hundreds to see Solange?

Yeah, me either. Don't do that mess.

The Punk to Soul Ratio

I've read the think pieces. Afropunk isn't punk rock anymore, it's lost its way, etc. And I got it before? But being there really drove home the point. I WAS pleasantly surprised by the skating and hardcore act I saw at the Pink Stage (was too busy with waiting in line to eat, eating, being trapped, and accidentally napping against a fence to visit properly), as well as the great looks I saw bleeding into the Red and Gold areas. But I still really, REALLY didn't expect the differences to be so...much. I kinda figured that maybe more punks weren't weird in the 'acceptable way' so they weren't making all the HuffPo slideshows with the brighter, cooler, more art-museum afro-fashion. And to be 100% real, there isn't a punk dress code by definition. It's just that when you see sequined jumpsuits or kaftans made out of leather strips, you have a fairly good idea of which stages those folks are gonna gravitate towards, and it's not the one where all the kids are moshing it out.

As someone that was and still is into subcultures that aren't mainstream, I don't buy the whole 'To be black IS to be punk' line one bit. It's not to say that to be black in many places doesn't include an amount of scorn and other-ation from the mild to the deadly. But if you look me in the face and say that a dude in combat boots, black grease paint, and repurposed bike chains doesn't get the double-take at MINIMUM from the mainstream black community of all origins...you're lying. So while we're in this hypothetical world, at least point me in the direction of that dude to make up for the deceit, he sounds great and we should hang out.

It's a statement I live and breathe by! I don't do improvising very well, and as such, as I've said, I tend to take a lot of extra stuff with me. I'm actually proud of myself however—I kept everything down to 2 carryons, laptop included, and one suitcase for the weekend. Still though, I was the only one of the NaturallyCurly crew to have to check a bag. Welp.

This time though? It paid off! Did my curlfriends need some glitter? Check with the sparkles and spirit gum. Some blister bandages? Yo. Extra belt? I had it! As for myself, jamming my fan and parasol into my teensy backpack proved, as always, to be indispensable outdoors.

Did I use most of my non-TSA approved beauty products, both soaps, and so on? ...no. But did many of the seemingly superfluous things I had come in handy? They sure did! Besides, I need to work my upper body anyway. Heave-ho!

So what did I get out of all of this?

A lot of good stuff actually. I won't lie, there were times I got pretty fussy because 'Waaah, my feet hurt, waaaah, there's too many people and I have to potty, waaaaah, I can't hold a third hollowed out fruit full of fruit juice in it because I only have two hands', and so forth. Festivals aren't for the weak! I did skim the lineup, but I know if I had checked everyone out properly and was looking forward to some acts in particular, I'd have probably gotten through a little better. As it was, I kind of approached this like going to a mall that was supporting black creatives that just happened to have musical acts present. But seeing the outfits, hearing Little Simz for the first time, eating the best street corn I've ever had after a lifetime of living in TEXAS—all that was time well spent. As for my body, well. Maybe it's time for me to review another bath bomb...

What did you think, curlies? Did I pass by any of you there? You know who to say hey to next year now, but go ahead and tell us how you rocked out!