This Is Elevating the Curly Hair Conversation... Beyond Just Hair 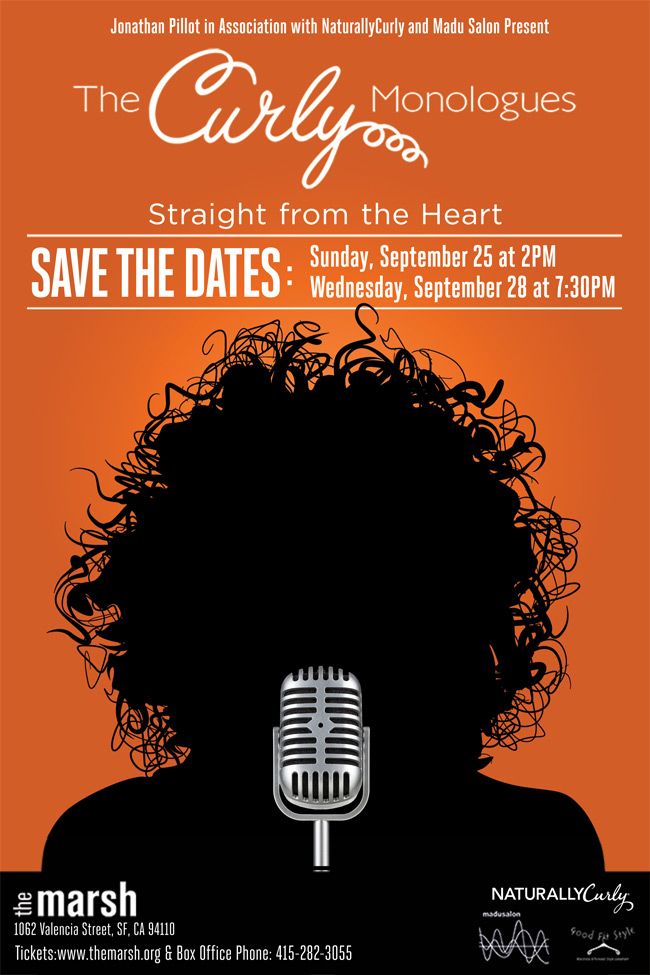 NaturallyCurly is proud to be the Media Sponsor for The Curly Monologues, a series of gatherings where women can share their personal stories of growing up curly on stage to an audience of other curlies. Curly Monologues founder Jonathan Pillot says "it’s an amazing thing to witness curly girls as they step into the theater, their eyes pop open and they all viscerally laugh or nod or shake their heads because there’s never been a time in their lives where they walk into a place and everyone has curly hair."

I recently sat down with Jonathan to find out what inspired him to start the Curly Monologues, and what makes the events such a cathartic experience for everyone involved.

What inspired you to start the Curly Monologues? As a man, and one with straight hair, what did you see in the curly story?

Curly girls always have something to say below the surface, and in my work as a storyteller and director I always try to focus on what’s going on below the surface. When I would ask a woman with curly hair if she had a story about her curly hair, she would look at me like I was crazy, because she didn’t have just one story – she had hundreds.

I realized that what these women were saying was so universal and powerful and personal and emotional and open and vulnerable and true and authentic, that the stories would and could work live on stage. And that was the moment that the Curly monologues were born.

I mounted a few in New York at different venues and they keep getting bigger. For the women, being in a room of other curlies kind of blows their minds and helps them feel welcomed in an environment where everybody gets everybody, and that gets to the heart of what this is about. My work as a storyteller around tribe is that they transcend age and ethnicity and all of those very limiting silos that people usually connect on.

Have you seen any common themes in the Monologues?

Curly hair is really just a metaphor for the bigger thing. The metaphor of fitting in, hiding out, not being yourself, accepting yourself. The Curly Monologues are about elevating the conversation beyond just hair.

I've pretty much heard everything at this point, but one thing that always gets me is women lose their jobs because their hair wasn’t the right hair, they feel pressure to straighten it for interviews. And really the extent to which curly girls are aware of the perception of them, that people perceive them as being wild or unprofessional.

Who started the whole notion that straight hair was professional? I often say when people make judgments about curly hair at a job interview it’s like saying that candidate’s arms were too long or something. You can’t make an extrapolation about their choices when they come to an interview based on how they look, that's just so off.

What’s your goal for the Curly Monologues?

I’ve always thought this would do really well overseas, so I’d like to do that too. It’s not just a New York thing, it’s certainly not a white thing, black thing, brown thing, it’s just a curl thing.  I just filmed my first monologue entirely in French with a mom and a daughter.

How do they come up with the stories?

They write their monologues, I just try to help them tell the story. In most of us there’s a little bit of a storyteller right? And in the Curly Monologues they’re telling a story that they know very well, it’s not like I’m asking them to act. They’re very comfortable because they’re just telling the truth. They don’t have to think about lines or forgetting something, this is their story.

What I always say is it’s really just allowing people to be. I’m never there as a director to tell somebody what to say. I’m just trying to create whatever it takes for them to be the most authentic version of themselves.

The next Curly Monologue is in San Francisco on Sunday, September 25. Click here to purchase tickets, and follow the Curly Monologues for more updates.