#BlackGirlMagic in the Fashion Industry: Where is the Inclusion?

Unequal representation as inclusion in the fashion industry is an idiosyncrasy that is slowly being called out on a major level but needs to be spoken of constantly in order to eradicate the cultural biases imposed by the fashion industry with its idealistic beauty standards that often do not include people of color. As the industry continues to thrive, trends are set, and style is an ever changing construct, we still have to look through the formidable lens that does seek to be an active voice against societal issues today. We saw Tyra Banks break many barriers as a Black model. We saw Naomi Campbell also break these barriers before Tyra, and there have been other women of color who continued to shine their #blackgirlmagic all down the runway. Yet, cultural appropriation is still a thing (cue Marc Jacobs), and with the further distinguishment of the fashion industry from black issues, a stance must be taken. 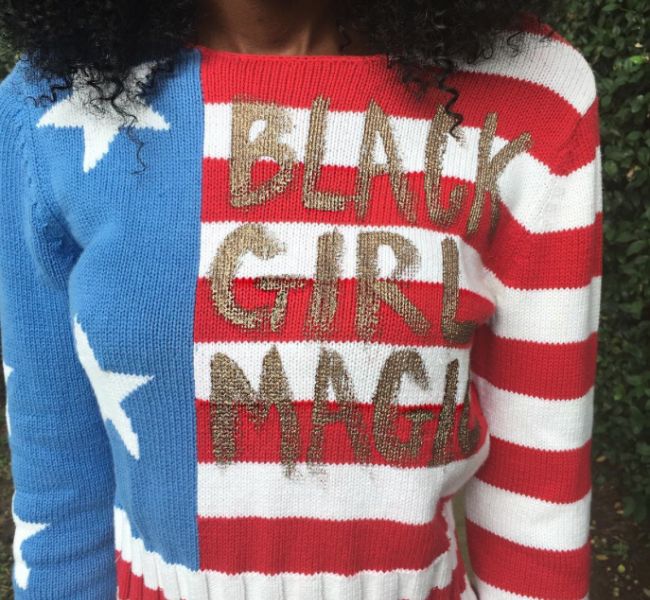 A TEDxUniversityofNevada Talk by model Ebonee Davis highlights these topics of unequal representation. Ebonee broke into the industry at 18 years old, but upon her entrance she was immediately cast aside. Her features were seen as a challenge and her skin seen as a “look” that most campaigns had no capacity for. In her talk, she mentions that it is time for America to lose its disillusioned, romanticized version of beauty and to begin to create actual imagery of people of color that celebrates our melanin, while also speaking out on the matters we face.

Her statements were echoed by Houston, TX style blogger Shayla Janel, creator of Wear My Chic and Slay For a Change. Shayla turned heads last year at NYFW, with her stand-up approach to this conversation. On the back of her pink sequined blazer was the statement, “Vogue Doesn’t Care About Ebony Issues.” Her response to this call-out was “Vogue doesn't care about Ebony issues is a metaphor about my perception of fashion. Vogue is a representation of the fashion industry and Ebony issues is reference to the excessive police brutality that has plagued our country.” Her crew also wore similar outfits causing major and much needed waves. 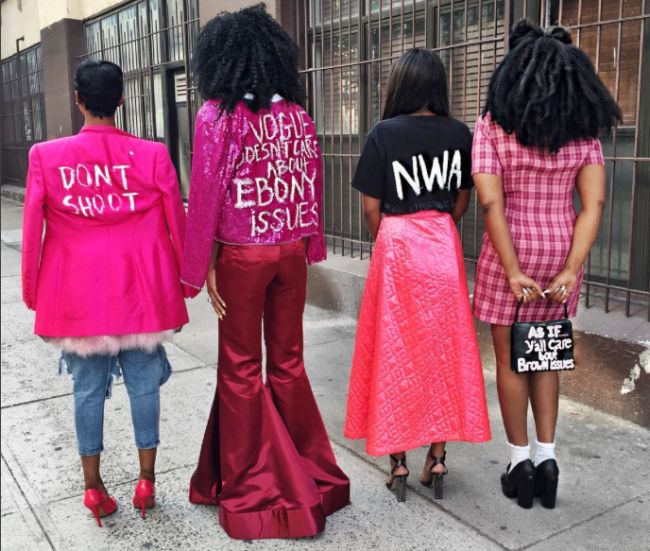 Shayla further stated that “I feel the continuous portrayal of lack of diversity is dangerous. Representation is important especially for easily impressionable young girls. I always have found irony in the fact that fashion is suppose to be new, refreshing and groundbreaking. Yet, their representation is centuries old. I think these fashion houses need to be called out...”.

With this industry, there is also a forced assimilation occurring for brown & black people into standards that were never meant for them to embrace. So the question remains, How do we practice full out inclusion and representation in a society that only wants to utilize the cool parts of us, but never the whole? Or a society that can make waves with the introduction of a plus size fashion show (THANK YOU!),  but not have a platform for political activism in the face of black issues by non black or brown people? We have done it before, with (PRODUCT) Red or even just recently with designers taking a stance on the political state of America. But the day is now here to also discuss the plight of minorities also. Shayla’s advice to fashion itself stems from her favorite quote by Martin Luther King Jr. “There comes a time when silence is betrayal. Our lives begin to end the day we become silent about things that matter. In the end, we will remember not the words of our enemies, but the silence of our friends."  Ebonee’s advice is to have the media recognize the role it plays in the spreading of awareness about different ethnicities, and how the media needs to recognize that it can shape equal representation in fashion. 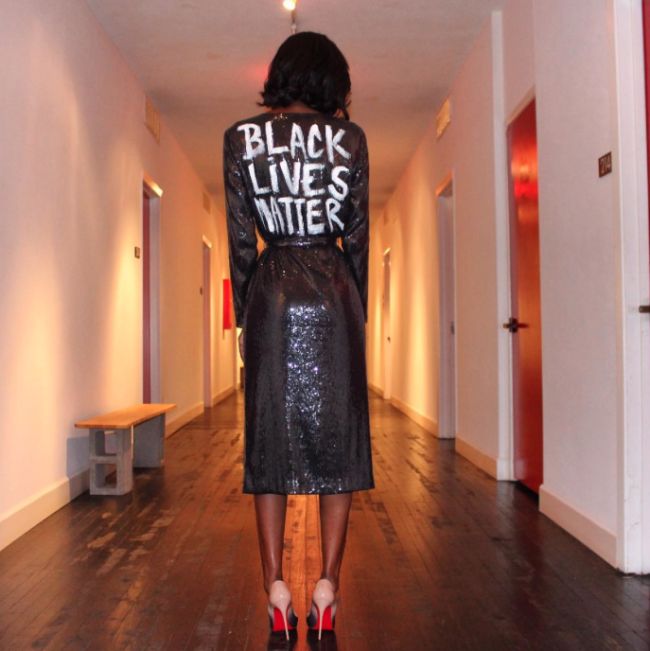 Thank you both to Ebonee & Shayla for using your voice and your experiences as a catalyst to create change, for being unafraid, inspired, and unapologetic about your black skin in the fashion industry, and for being visual representations of #blackgirlmagic! We see you!

To find out more information on Slay For A Change, check out Shayla’s social media below: