How Wearing Cornrows Helped Learn About My Roots

My mom was always meticulous about how my hair looked growing up. I couldn't leave the house with a single hair out of place, and every morning was spent in our little bathroom with her detangling, slicking back, braiding, pigtailing, or twisting my hair into perfect curls until it looked perfect, adding beads or bows to match with my outfits or school uniform. 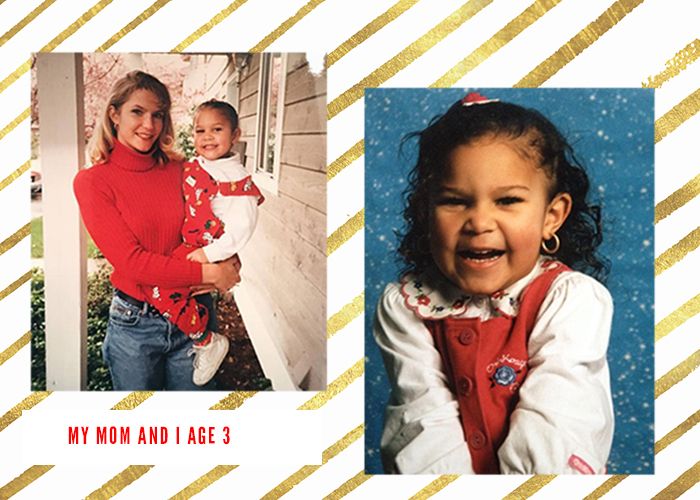 Looking back, I can sympathize with my mom, and I can better understand the pressures and insecurities of being a white mom with a mixed raced child. She has since told me she was always afraid how I/we would be judged if my hair looked 'a mess.' Due to this, whenever I used to spend weekends with my dad growing up, I was always worried about how my hair looked when I went back to my mom. Usually she would braid it back for me so I wouldn't have to do much to it, but after a few days those pesky little frizzes would start to appear. Soooo, one day when I realized I had a bunch of "frizzies" at the top of my head after being at my dad's for a few days (mind you like many kids, I was a little scared of my mom), I made the rash decision to cut off all of my frizzes. Of course this only made it worse, and my mom noticed right away. All this is basically to preface why I started getting cornrows in the summer. 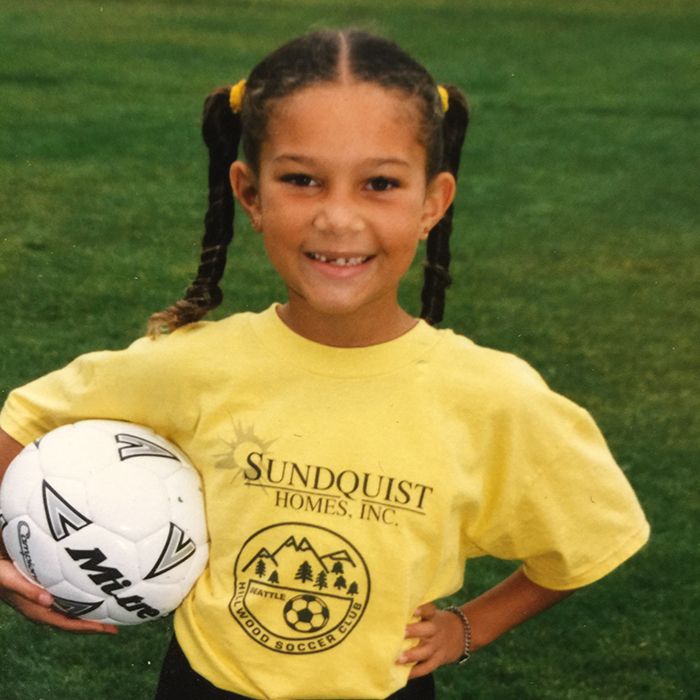 Missin some teeth, still cute tho.

The First Time I Wore Cornrows

Since my mom no longer trusted my dad, or me to take care of my hair... I started getting cornrows before any summer camp, sports camp, or extended period of time that I would be away from her. I distinctly remember the first time I had my hair braided back for a camp, and how freeing it felt to not have to worry about my hair. But I also remember feeling nervous about how others would perceive my new hair, even though I was proud of it at the same time. 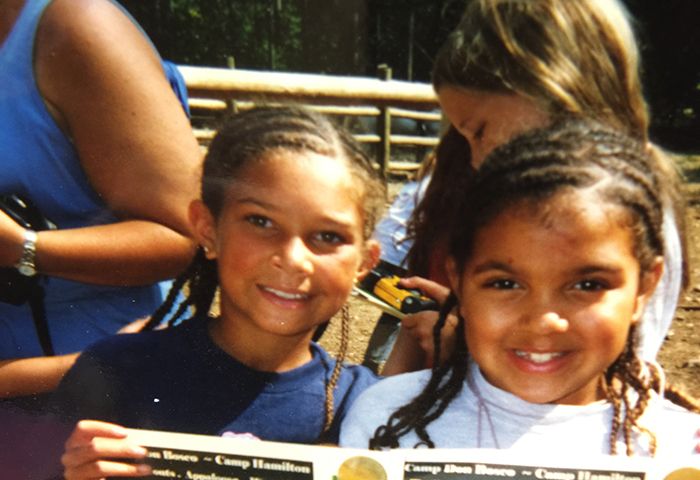 Najae and I at Summer camp with our fresh braids.

One of my favorite kid hair stories besides cutting off my frizzes (I know we all have some), was when I told my best friend Rachel in the 4th grade who was complaining about taking care of her hair, that she should just go to Kitaka (my hairstylist and swim teacher) to get her hair braided. I continued with "after she braids your hair, just go cut some of your mom's stockings to make a durag to wear at night! Then you can keep the braids in for weeks." Rachel, who is still one of my best friends today, is also mixed, but she is Korean and white. So today, when Rachel and I look back on this time, we can't help but hysterically laugh about the innocence of such a conversation. 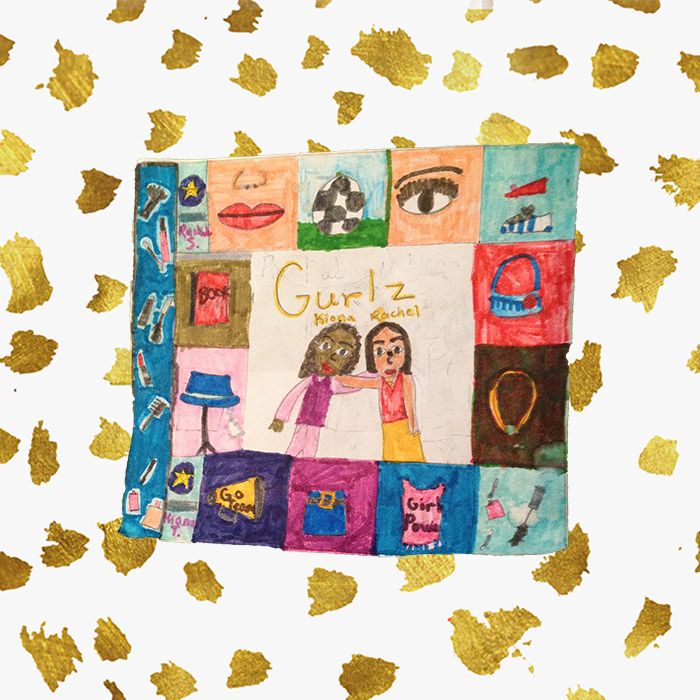 While I didn't know much about cornrows at the time, I was beginning to understand the cultural and racial signifiers of the hairstyle. Since I went to a predominantly white school, many of my friends were curious about the style, "Is that your real hair?" "Can you make your hair into an Afro?" "How do you wash your hair?" "You look like a mini Alicia Keys!" Honestly, thank God for Alicia Keys and Destiny's Child, because they were popularizing cornrows to my generation around the same time my mom decided that would be a part of my summer hair routine - therefore making it "cool" and not othering me more than I already was.

But it wasn't until I was much older that I learned more about the roots of cornrows, the political and social impacts that come with wearing them as a Black woman, and about cultural appropriation more broadly.

In high school, I started to notice that every time one of the more wealthy non-Black girls traveled to the Caribbean, they would post about 183 photos of themselves on Facebook with their hair braided back. At the time it bothered me, but I didn't have the language or education yet to articulate why.

The common argument against what I would later know as "appropriation," is that they were merely appreciating a culture. That America is a melting pot, and this is simply a symbol of inclusion, an homage to Black culture. However, these girls never made me feel included. I grew up very insecure about appearing "too ghetto" or too "Black" in white spaces. This followed me for much of my adolescence, and this is just one of many reasons why I find it problematic when white people wear this style. When I wore the style, I had to worry about being followed around in a store, but when they wore it- it signified wealth, that they were well traveled and 'trendy'.

Those who appropriate cornrows often ignore the roots of the hairstyle, yet are credited with conjuring up a 'new' 'trendy' or 'fashionable' style, whereas Black men and women that have been wearing the style for years, have been suspended from school, told they look unprofessional, been banned from wearing the style in several organizations across the world, including the US military, and have been looked down on by mainstream society when they wear it.

Those who appropriate cornrows often ignore the roots of the hairstyle, yet are credited with conjuring up a 'new,' 'trendy' or 'fashionable' style, whereas Black men and women that have been wearing the style for years, have been suspended from school, told they look unprofessional, been banned from wearing the style in several organizations across the world, including the US military, and have been looked down on by mainstream society when they wear it. One of the most stark examples of how national discourse positions cornrows as more acceptable when worn by white women, is when The LA Times posted an article about the new trends in hair, and stated "Cornrows are moving away from urban, hip-hop to more chic and edgy," alongside photos of Cara Delvigne and Rita Ora. Hmmm...

Kareem Abdul Jabbar explains in an essay for TIME that one strong point proving the legitimacy of appropriation, is economic; "In general, when blacks create something that is later adopted by white culture, white people tend to make a lot more money from it. Certainly, one can see why that's both annoying and disheartening. Through everything from access to loans to education, systemic racism has created a smoother path to economic success for whites who exploit what blacks have created. It feels an awful lot like slavery to have others profit from your efforts."

Another point I often use to explain the issues with appropriation is through the term "columbusing." Urban Dictionary defines this term as "When white people claim they have invented/discovered something that has been around for years, decades, even centuries." But the word was coined by College Humor in a funny skit you can watch here. 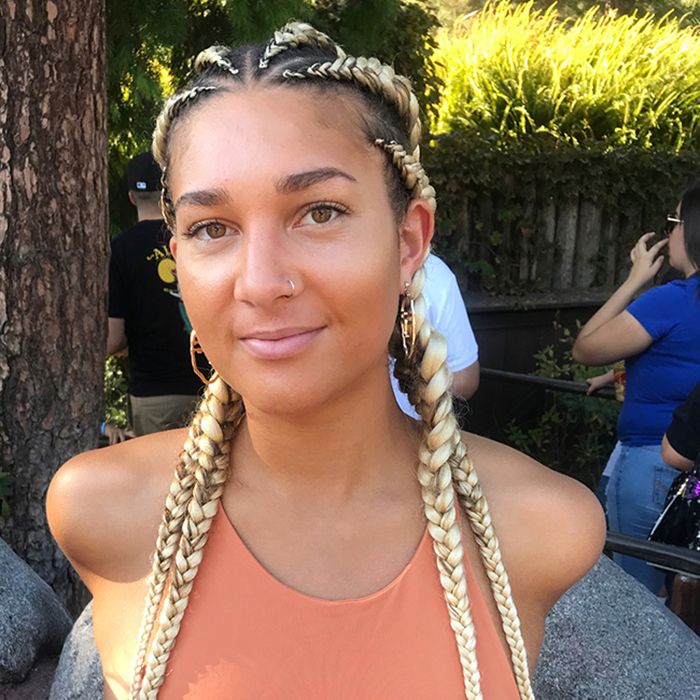 These are Goddess(Ghana) Braids. I haven't worn traditional cornrows since I was about 13.

Contrary to widely circulated and unfounded myths, racism is not just based on skin color. It often manifests in microaggressions pertaining to hair, specifically textures and styles. So when it comes to who is 'allowed' or not allowed to wear cornrows, the deciding factor is not just about melanin - it's about power structures and equality. And until Black people receive credit - both economically and aesthetically for styles on and off the runway, be it hair, fashion, beauty, etc. - in my opinion, the style is FUBU (For Us By Us).

As stated in a previous article about the History of Bantu Knots, I don't have the power to determine whether or not you should wear them if you are not Black. And I certainly don't possess the power to make people listen. But, I can advise that before trying on other peoples' culture and traditions, that you understand and appreciate the importance of what you are trying on, acknowledge its history, recognize the social implications that belong to the tradition, and vocally and physically support the people affected by those social implications. If that doesn't make sense to you and you are not Black, then I would skip the hairstyle on your next trip to Jamaica or during New York Fashion Week as an attempt to look 'cool', and try complimenting the women who do wear it.

Do you have any funny kid hair stories, or do you remember the first time you got cornrows? Share in the comments below because I know I am not alone!