In East Asia, Digital Perms Are A Thing Now

For years, women of color have been subjected to the pressure of permanently altering the texture and appearance of their hair in order to achieve the more socially acceptable Eurocentric beauty standard. Asian women have not been exempt from this. 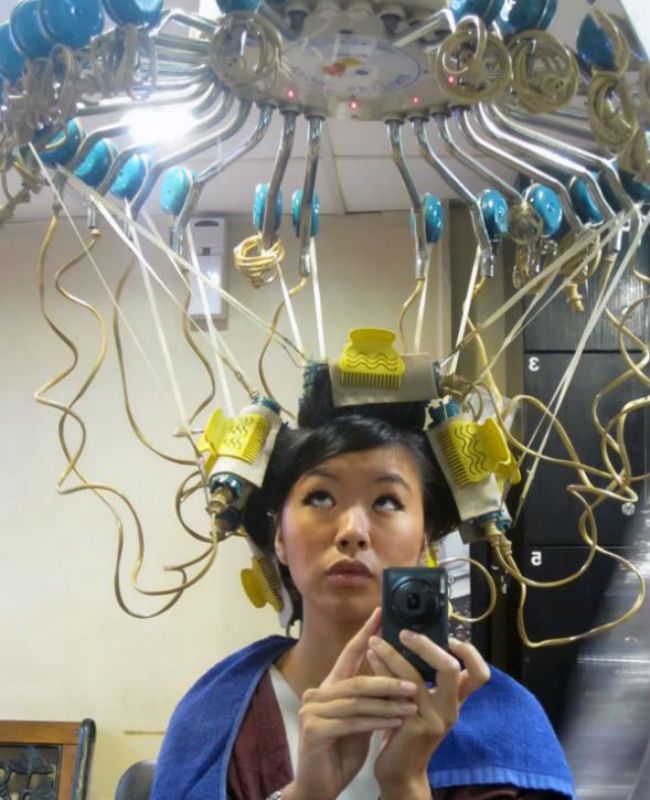 Even with the new wave of the natural and curly hair movements in full effect, texture envy is reaching record level highs--or lows, depending on how you see it.

For years, women of color have been subjected to the pressure of permanently altering the texture and appearance of their hair in order to achieve the more socially acceptable Eurocentric beauty standard. Asian women have not been exempt from this. (Don't believe me? Google K-Pop.)

Much like the chemical relaxers we've known about for decades, there's a new hair retexturizing product growing in popularity among the young women of East Asia and now, America. It's called the digital perm, and it's meant to totally break down naturally thick, coarse strands while adding a slight beachy-wave like pattern.

It's called the digital perm, and it's meant to totally break down naturally thick, coarse strands while adding a slight beachy-wave like pattern.

Also called a hot perm, or a body wave perm, this chemical process takes about four hours for application and lasts about six months when done by a licensed professional hairstylist.

Many Chinese salons are beginning to offer the service in America. Based on the density of a full head of hair, a stylist may vary the amount of time they leave a client plugged in. Those with bleached or thinning hair are not recommended for the digital perm, as the solution would weaken the strands and the hot rollers would cause too much additional tension on the scalp. The result is supposed to give a woman natural-looking "beachy bombshell waves".

Recently, journalist Hoai-Tran Bui decided to try the chemical retexturizing technique for herself.

"The initial wash and application of perm solution took most of the first hour. I spent the rest of the hour under a sort of heat halo that would soften my hair up and give it more elasticity.

After another wash, my hair was sectioned off into small electric rollers that were then plugged up to an intimidating heating contraption. Because of the excessive heat, the rollers could only be placed halfway up my hair to avoid burning the scalp, which would eventually lend to that more natural look. But my stylist, Ryan, still took extra care to avoid any burning dangers, placing pieces of heat-resistant foam around the rollers and my roots as buffers."

For an hour, Hoai-Tran sat under a hooded dryer following a "neutralizer over the curls after the heat had died down." Because her individual hair strands were so thick, stylist Ryan was inclined to add more rollers than what is usual. One more shampoo and rinse later, Hoai-Tran's stylist blow dried her new wavy texture. This was the outcome.

"Most of my hair was still soft, if a bit frizzy, and my curls were almost too natural--you could only really see the ends curling up. I chalked it up to my shorter cut and that blow dry show, and decided to experiment later that week to see if I could get more dramatic waves."

Strikingly similar in composition to other popular straightening and blowout products, a "quality" digital perm will without a doubt leave the client with irreversible heat damage, so it's important to do thorough research before making the commitment.

The upkeep of a digital perm also requires time and money commitment; not only will each process leave you $100 to $200 broker, but most stylists recommend investing in a regular keratin treatment service as well. Frizz control products, blow dry creams, and heat protectants will also be necessary for day to day styling purposes.

Have you heard of the digital perm?

Would you get one for permanent beach waves?