Un'ruly Explores What it Means to be "Pretty" 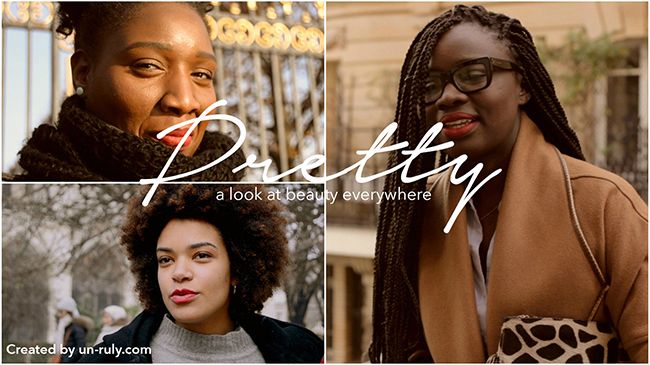 The documentary series Pretty produced by Un’Ruly explores different ideas of beauty across the globe.  Un’Ruly founder Antonia has interviewed over a dozen women from London, Milan, and Paris gaining insight into how each woman defines the word pretty. While we often use pretty to describe someone’s outer appearance, each woman shares their in-depth perceptions of beauty, revealing how they conceive the idea of beauty.

"Pretty is knowing you are enough." –Fatima, London

As I sifted through each video one by one not only did I want to hop on the first flight to London due to the insanely beautiful fashion, but I found myself connecting to the women, sharing similar experiences with accepting what the world stipulates as pretty. Unsurprisingly the media played an integral role in the acceptance of beauty in these cities too, which is an issue that transcends cultures. Although each woman described beauty by her own standards laced with extreme confidence and self-awareness, they acknowledged the lack of black representation in the media. While black beauty and fashion are often seen on the streets of a melting pot like London, the mass representation in the media does not reflect that.

“I might not feel represented in the media but I’m not heartbroken because I represent myself. I don’t need the media to represent me and the women I know and love represent themselves too.” - Melinda, London

Still aware of what the mainstream standards of beauty are for certain areas, for example English Rose in London, these women felt comfortable in their skin knowing those typical standards do not define who they are. Fredamily, a black model in Italy, remembers signing with her agency and being told it would be difficult because she is “not so tall” and “so black”. Fredamily is taking her model opportunity to prove to herself that against all odds she can still make it in the beauty industry in Milan.

The increasing preference and acceptance of natural hair over the past few years has created a space for women of all tones and textures who look like me, which is very exciting. Accepting my own beauty in the beginning of my natural hair journey eight years ago took time. Platforms like NaturallyCurly and Un’Ruly continue to push for positive images, which helps women feel more comfortable with one tip and one narrative at a time.

Are you following this awesome series? What does pretty mean to you?