The Ancient Benefits of Ginseng Leaf Extract for Your Hair 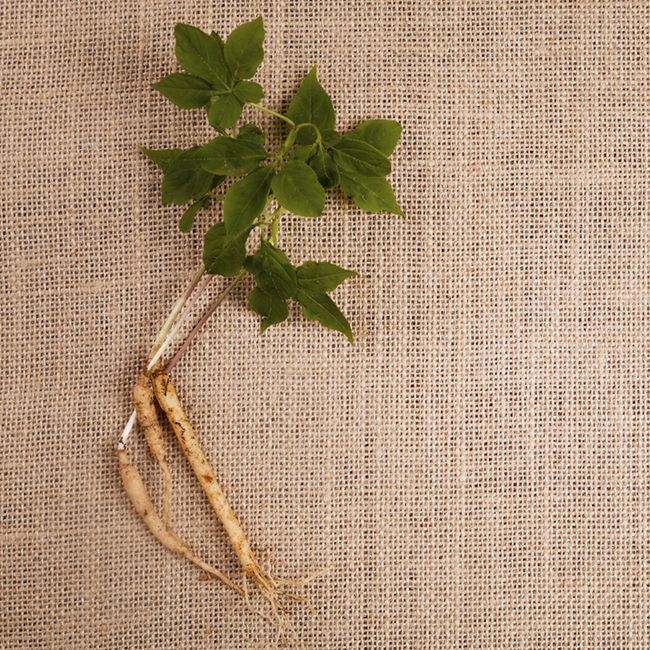 Photo by phototake -- Getty Images
There are eleven different varieties of ginseng, a short, slow growing perennial plant with fleshy roots and is from the Araliaceae family. The word ginseng comes from the Chinese term "rénshen," which means “man root.” For over five thousand years it was commonly used for its rejuvenating powers in the mountains of Manchuria, China. The benefits of ginseng were first documented during China’s Liang Dynasty (220 to 589 AD) , but by the third century A.C., the demand for China’s ginseng sparked a huge international trade demand for the herb from other parts of the world.

In 1716, a Jesuit priest in Canada found and identical herbs to Asian ginseng near Montreal and it soon became what we now call American ginseng. Soon after it was found to be all over deciduous forest in the eastern part of the United States and American ginseng is called Panax quinquefolis. 95% of American ginseng is grown in Wisconsin but the demand for it is so high that is has been declared a threatened or endangered species in some states.

Ginseng is found in rich, cool woods and the short plant grows three to seven compound leaves that drop in the fall and bear red or yellowish colored fruits during summer. Varieties of ginseng are determined by the shape of the roots and the roots contain the highest amounts of medicinal value. It can be consumed orally, in supplements, energy drinks, teas, beverages and still in other forms.

The benefits of ginseng leaf

Ginseng root is used more often than the leaf stem but extracts from the leaf also contains similar active ingredients with significant pharmacological functions. One of the best things about using the leaf is that it can be found at a cheaper price than the root. The leaves contain several active ingredients like flavonoids, ginsenosides, amino acids, fatty acids, polysaccharides, polyacethylenic alcohols, peptides, triterpenoids, and volatile oils. It also has anti-aging and anti-oxidant properties that may be overlooked as the root gets all the attention from consumers.

While hair is not living, the keratin-based structures can be susceptible to oxidative damage from broken hair, frizz, split ends and tangling according to curly-haired polymer scientist and cosmetic chemist, Tonya McKay. Antioxidants help to prevent damage to the cells and structures like the saponin extracted from the American ginseng leaf-stem and studies have shown that antioxidants extracted from panax ginseng leaf-stem help to restore free radical damaged cells.

Ginseng leaf extract also has anti-aging properties, which improve the immune and endocrinal functions of the body and in turn stimulate and activate the skin, scalp, and hair. This helps in the production of collagen while ridding the skin and scalp of free radicals. While not as popular as ginseng root, ginseng leaf is a cheaper and viable option and can be found in leaf or oil form.