Which is Best for Your Hair, Red Palm Oil or Palm Kernel Oil? 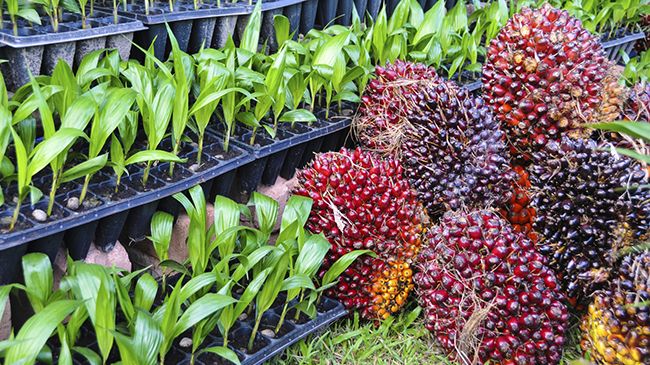 Oil palms give us an abundance of edible oils that are common to some and unfamiliar to others. There is more to palm oil than many are aware of and there is more than just one oil from the amazing African oil palm tree. The two most popular are the red palm oil and palm kernel oil. First off, they are not one in the same. They come from the same tree but where and how they are extracted differ greatly.

Red palm oil is also known as crude or virgin red palm fruit oil and is one of the most nutritious, edible oils in the world. Doctor Oz says it is derived from the fruit of the oil palm tree or Elaeis guineensis it gets its name from the rich, deep red color in its natural, unprocessed state. According to Livestrong, red palm oil has been consumed for body and hair for over 5000 years and holds plentiful health benefits for both.

The seed inside the palm fruit is the palm kernel and the source of palm kernel oil. Oilypedia says it should not be confused with coconut oil, which is extracted from the coconut kernel, despite it having more saturated fat. Along with being rich in lauric acid, palm kernel oil is a stable cooking fat that is resistant to oxidation and going rancid, so it works well in food manufacturing.

What is the difference?

Which is better for healthy hair?

Not all natural oils are the same nor do they harbor the same benefits for your bodies. It seems that every week we are discussing a different oil that yields longer, stronger tresses, but some oils have do not have many advantages and should either be used sparingly or not at all for beauty. For hair, red palm oil has toctrienols, which are members of the vitamin E family and has been used for many years in treating skin ailments. It is also found in many anti-aging products. Livestrong says many shampoos, conditioners, and soaps have palm oil in them to remove oil and dirt from the hair and skin, which includes the scalp.

There is a refatting agent present in red palm oil that restores the hair and skin’s natural oils that many shampoos and soaps strip away. Red palm oil also provides conditioning and softening to the hair for its deep moisturizing properties. According to Livestrong, our hair needs fat-soluble vitamin A and vitamin E to nourish our hair and roots, which can come from the red palm oil through the beta-carotene after being consumed and converted to vitamin A.

Livestrong also says one of the biggest benefits of palm kernel oil is its completely cholesterol-free and many believe this makes it much healthier than butter. It has vitamin K, which is an essential fat-soluble vitamin for bone health. Vitamin K also resists oxidation under high cooking temperatures and upon storage, which makes it a more favorable cooking oil.

Winning convincingly for moisturizing, cleansing, and nourishing, red palm oil is the oil that will care for your hair compared to palm kernel oil. It seems it can benefit all hair types, especially ones who tend to suffer from the drying effects of shampoos. If loss of moisture is also a concern than this oil would be perfect as well.

Who has tried red palm oil or even palm kernel oil for hair, skin, or cooking?