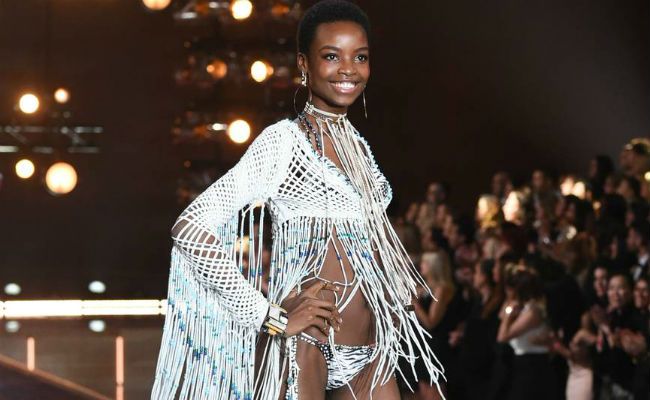 Model Maria Borges is no stranger to the Victoria's Secret Fashion Show. And third time's a charm.

Having walked in the acclaimed show both in 2013 and 2014, everyone couldn't help but notice something strikingly different about Borges' appearance. This year, the 23-year-old Angolan beauty chose to rock her natural hair TWA rather than conceal it with a wig like she did in her prior Victoria's Secret shows.

I told my agent I wanted to walk in the Victoria's Secret Fashion Show. I was nervous, but I had to do it.

Maria's presence during the event was effortlessly confident; her beautiful facial features and amazing physique statuesquely glided down the runway in the most graceful way. But according to celebrity news blogger B. Scott, Borges wasn't so sure of herself before the show actually happened. "I told my agent I wanted to walk in the Victoria's Secret Fashion Show," the model stated. "I was nervous, but I had to do it." Last night a wig-free Borges caught all of us off guard.

With much publicized news like newcomer models like Kendall Jenner and Gigi Hadid joining the squad of "Angels", something like this was easily overlooked until it was time for the public to speak. But no one could take their eyes off of the fearlessness Maria Borges showed off the entire time. As it pertains to the fashion world, Victoria's Secret theme has had its fair share of blame for constantly forcing a one-size-fits-all standard of beauty onto women: sun-kissed beige skin, with an emphasis on big breasts and a thin frame. Aside from having a naturally slender figure, Borges represents many of the neglected equally beautiful physical features that especially go unnoticed during, of all things, a Victoria's Secret Fashion Show.

Mic.com writer Rachel Lubitz says, "In the fashion and beauty industry, there's been a rise in models themselves drawing attention to the industry's overall lack of diversity, in particular its consistent overlooking of black beauty."

Borges represents many of the neglected equally beautiful physical features that especially go unnoticed during, of all things, a Victoria's Secret Fashion Show...

"Africa, this one's for you!" an excited and proud Borges said on her Instagram, followed by the hashtag #MBMakingHistory. Whoever didn't know the name Maria Borges before yesterday, has taken notice today, for sure. The model has been trending across social media platforms, and for good reason. Maria, we salute you for displaying such grace and bravery in embracing your natural hair during the 2015 Victoria's Secret Fashion Show.