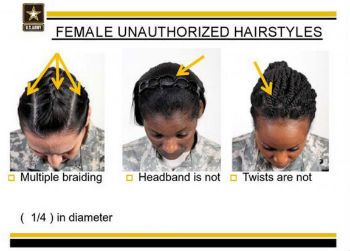 Recent changes to the U.S. Army’s AR 670-1 have sparked a lot of discussions, especially in the natural hair community. According to The Stream, the U.S. Army has made changes regarding grooming and appearance in the AR 670-1 that took effect on March 31, 2013. These changes involve banning hairstyles such as dreadlocks and twists. In addition, the U.S. Army set limitations for braids and specifies sizing and spacing measurements that are considered acceptable.

The Stream also states that the U.S. Army’s PowerPoint presentation about these new changes was leaked on March 20th.  The presentation included images of unauthorized female hairstyles. The full AR 670-1 lists the changes and descriptions for each hairstyle.

"It's very targeted because we all know who they're talking about even though they never explicitly say the world 'black' or 'African-American.' We all know who typically wears these types of hairstyles and then they went as far as to include pictures of black women in the PowerPoint,” U.S. Army Veteran, “Tonya”, told The Stream.

However, she isn’t the only one who expressed how she felt about the new changes.  Some U.S. Army women have found that natural hairstyles are easier to maintain while performing their duties. Now, their hairstyle choices are limited. They can choose from options such as hair extensions and wigs. 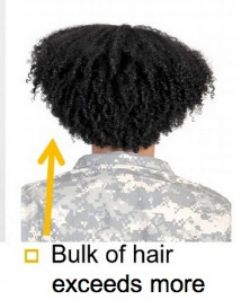 Since the change, the natural hair community has voiced their thoughts about the grooming standards over the Internet, including social media networks. Sgt. Jasmine Jacobs, of the Georgia National Guard, created the White House petition asking for the U.S. Army to reconsider the changes in the grooming standards. The petition states the following:

“More than 30% of females serving in the military are of a race other than white. As of 2011, 36% of females in the U.S. stated that they are natural, or refrain from chemically processing their hair. Females with natural hair take strides to style their natural hair in a professional manner when necessary; however, changes to AR 670-1 offer little to no options for females with natural hair. In the proposed changes, unauthorized hairstyles include twists, both flat twists as well as two strand twists; as well as dreadlocks, which are defined as "any matted or locked coils or ropes of hair." These new changes are racially biased and the lack of regard for ethnic hair is apparent. This policy needs to be reviewed prior to publishing to allow for neat and maintained natural hairstyles.”

In an interview with Army Times, Jacobs stated, “I’ve been in the military six years, I’ve had my hair natural four years, and it’s never been out of regulation. It’s never interfered with my head gear.” She also stated in her interview that she “kind of at a loss now with what to do with my hair.”

Click here to sign the petition and make an impact on our current military hair guidelines for ethnic women.