This Blogger Says We Should Allow People to Touch Our Hair 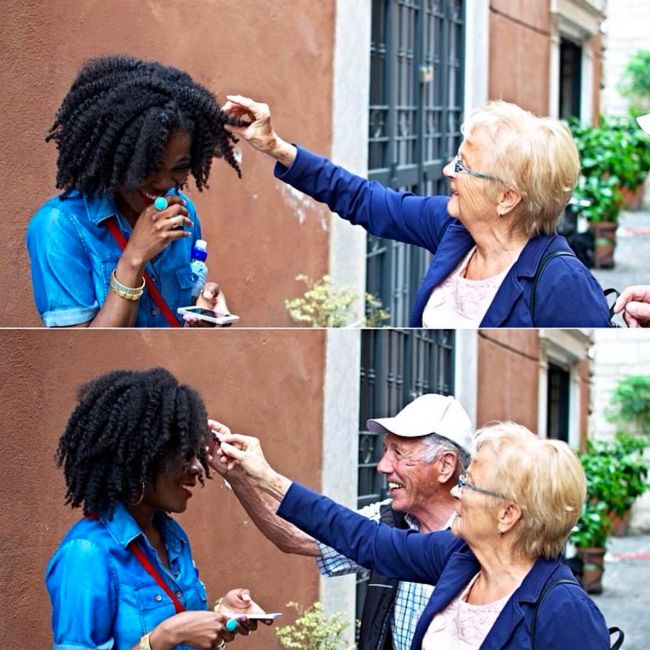 Would you let a stranger touch your hair in public?

Would their skin color change your answer ? For Cynthia Andrew, creator of SimplyCyn, the answer is no.

She recently reposted this photo of hers which was captured two years ago during an encounter she had in Italy with a white man and a white woman passing by showed curiosity about her hair. Andrew told Yahoo! Beauty:

"I appreciate the dialogue and perspectives I didn't consider. However, I do draw the lines at generalizations about groups of people and attacks....I just think we need more images and conversations about how we walk through this world together," she shared. "That's how we get better. It's not about seeking validation or admiration. It's just that as an American, an African, a black woman, a child of the world, who has seen beauty in every shade, race, and culture, I want people to see a beautiful moment between two strangers and to remember that most of us — the majority of us — are good, kind people."

"I wanted to reshare this photo taken 2 years ago in Italy because it's been reposted and shared over the past few without context and I thought I should put it in context - especially as I am not the only one in this image. You see, unbeknownst to me, many times when this image has been shared- it has been shared with negative connotations and implications- assumptions that this couple is doing something horrible, that they are treating me as an animal in a zoo, some even questioning my sanity for letting them "pet" me (laughing emoji)- and this was so far from any of that. This lovely couple 's only fault is that they were unaware that their gesture is one that stirs up so many real and justified feelings of objectivity, judgment and dehumanization for many black women. But I think here is where intent is important and here is where we have to be careful about who we condemn. There are so many people deserving of condemnation and you've seen them very clearly over the last few and I don't just mean past few days. This couple does not belong in that class- they were kind, they were complimentary- and Yes, I would rather someone reach out in curiosity than with hate. We can continue to educate our non black friends why this gesture carries more weight than they realize- but we should be careful not to vilify people so quickly - we should reserve that energy for those who are much more deserving of it- there's quite a few of them out there showing their faces. #tbt #love #life #beauty #lovewins #blackgirlmagic

While Andrew had some followers on her side, others were not having it.

One commenter states, "true but I'm saying if they ask to feel it! Now if they just go up and touch my hair then I would be caught off guard."

"I hear your point but I don't completely agree," another stated. "Curiosity? What is the curiosity for? Hair is hair! No need to touch mine..."

What is your take on this?