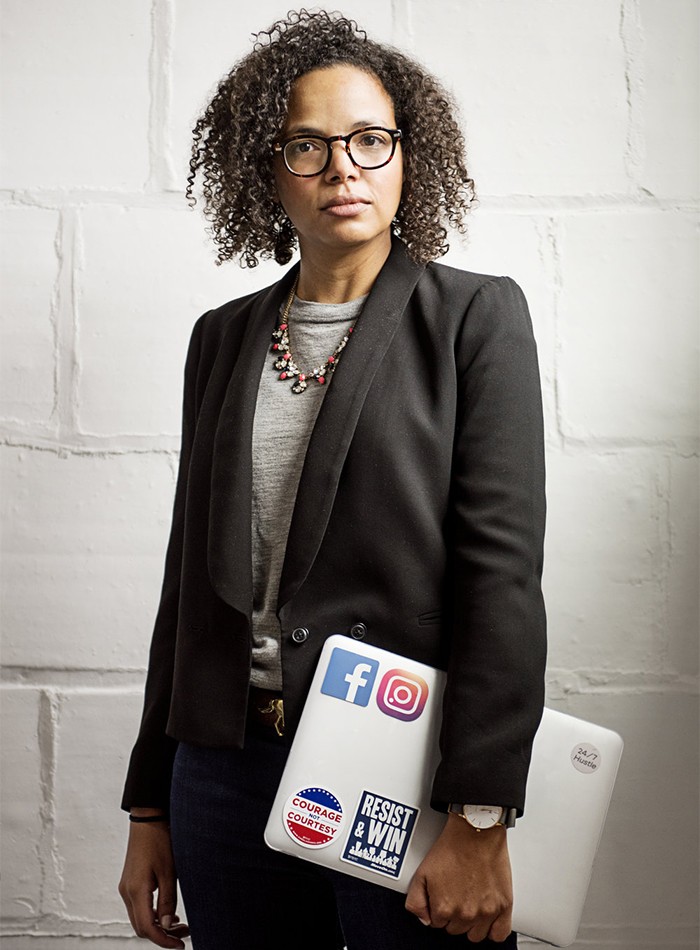 A few weeks before the 2016 presidential election, a 33-year-old woman from coastal Maine named Libby Chamberlain created a private Facebook group for her friends encouraging them to wear pantsuits to the polls when they voted. In a few days, she named the group Pantsuit Nation. When Pantsuit Nation became a viral phenomenon days before the election last November, the private Facebook group was focused on electing the first female president. The group became a place where people told their stories from a variety of perspectives.

And then came Election Day, and Hillary Clinton was defeated.

“We wondered if people would leave the group in droves because the thing we hoped for didn’t happen,” recalls Cortney Tunis, executive director of Pantsuit Nation.

The exact opposite happened.

While the community had 3 million members on Election Day, it has now grown to 3.7 million.

“When things didn’t go the way we hoped, immediately people came to the group to seek solace among people who felt the same way they did,” Because that storytelling piece took root early on, the community turned into a place where people shared their stories and fears about what they were doing to counteract what they anticipated would happen.”

I met Tunis at a media gathering with publishers of websites and blogs representing every possible interest – from financial planning to pets to health. When I saw her amazing head of hair, I immediately made a beeline over to meet her and to compliment her on her curls. Tunis became involved with Pantsuit Nation as a member of the Facebook community at the end of October 2016, and became a moderator in the group a week later. She became executive director in July 2017, after working for an executive search firm and the Mayor’s Office in the city of Boston.

As a Pantsuit Nation follower, I was thrilled to find out she was the executive director. As somebody who has built a community connected by our curl stories, I wanted to learn more about how she has created this powerful, diverse community, especially since the original mission has changed into something much different.

“I was climbing onto the rocket ship as the engines were being lit,” Tunis says. “It was going to take off no matter if I was on board or not, and I wanted to be on board.

The leaders of Pantsuit Nation realized their community had become even more relevant and important, and that they had a responsibility to keep people engaged. “We were building an online community that was a version of what this off-line community would look like – a place that energized people to take civic action – to vote, go to a town hall meeting, call your representatives,” Tunis says. “Last weekend, over a thousand members posted about their participation in events across the world to support the reunification of immigrant families.”

Pantsuit Nation (which technically a now both a 501(c)(3) and 501(c)(4) nonprofit nonprofit organization, remains dedicated to publishing personal stories as a means of social change.

“The thrust of the group is to nurture storytelling and community,” says Tunis. “We believe that we are a place where we can have challenging conversations about things that not everyone agrees on.”

Like NaturallyCurly, where conversations start with hair and veer to topics as varied as books to sex, Pantsuit Nation has empowered women from a wide range of backgrounds to get politically involved in issues they care about.

“The size of the group has elevated us to a level of visibility to show you can build meaningful communities in an online space,” Tunis says. “It feels really necessary because the election wasn’t the only thing challenging to people supportive of the policies of Sec. Clinton. Those challenges continue to happen. It’s amazing to see how much discrimination cuts across so many areas.”

Pantsuit Nation has partnered with a number of organizations to support members in their offline actions, including a recent live video series about running for office with EMILY’s List and mobilizing people to events across the country with MoveOn. The partnerships are designed to give members straightforward ways to participate in democracy. Looking ahead to November, Pantsuit Nation has rolled out a Facebook Messenger service to share stories and actions, and will soon be sharing more partner-driven tools to get people involved in the upcoming elections.

Tunis says that every day, she sees the power of the community, in both big and small ways.

More than 180 community members are running for various elected offices, and most are first-time candidates. “They are doing things that are really serving the community around them. Many people credit Pantsuit Nation, at least in part, with giving them the motivation and confidence to say ‘I want someone good in that job, and I can be that someone good in that job.’ That’s a really important legacy of this organization.”

A sampling of recent posts included a young woman who recently graduated from a high school in the midwest in Michigan, wearing an orange arm band to protest gun violence. Another post was from a woman who was fighting Stage 4 cancer, and was also fighting to keep her healthcare. A third woman shared photos at her college graduation with her father, an immigrant who came to the United States 40 years ago. “I remember coming home from school in middle school to help him read the paper. He wanted to become a citizen.”

“I had my own reasons for supporting Clinton, and it was fascinating to see how varied people’s reasons were for supporting her,” Tunis says. “I got a much more textured understanding of how people were directly impacted by her as a person.”

For Tunis, this role has allowed her to stretch and challenge herself. As an entrepreneur helping to build something from the ground up, she has been involved in a variety of roles, from basic management of the web site, to grant writing to thinking about brand positioning.

Tunis says her mom has been an important mentor and advocate for her, helping talk her through her challenges and occasional moments of panic. Her one big takeaway from her work at Pantsuit Nation is the power of one person to make a difference.

“Seeing how people are making a difference makes it an easy decision to be a part of it,” Tunis says.