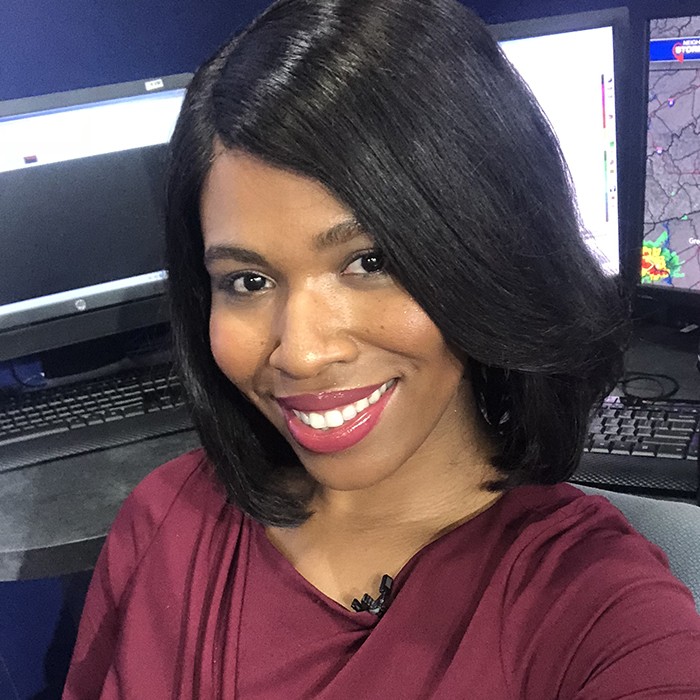 For viewers of FOX 46 Charlotte, meteorologist Britney Hamilton’s short, shiny bob has become her signature look. But when she leaves work, Hamilton takes off her wig to uncover her 3c/4a coils.

“Now, I’d like to wear (my natural hair) on air,” says Hamilton, a North Carolina native. “I feel like it’s important. My natural hair is a part of me.”

While natural styles is accepted in most work places, that hasn’t necessarily been the case with TV news – especially for those with tighter curl patterns. It is rare to see on-air personalities with Type 4 coils.

Hamilton hopes she soon can combine two of her passions – her natural hair and meteorology.

And in the process, she wants to change attitudes within her industry.
Hamilton was in the eighth grade when Hurricane Katrina hit Louisiana.

“I watched how powerful the storm was and the effects it had on Louisiana. I wanted to learn more about hurricanes.”

While she was interested in meteorology, she didn’t necessarily see it as a career. So although she looked for colleges that offered meteorology, she thought she would major in psychology or political science.

Although she knew she wanted to pursue a career in meteorology, It wasn’t her initial intention to get a job on TV.

“I had self-esteem issues,” says Hamilton. “I’m full figured and you don’t see a lot of black meteorologists.”

After graduation, a friend who in the news business helped encouraged her to put together a demo reel to send to TV stations. Hamilton says her decision to wear a straight wig was the result of conversations she had with people in the industry – an unwritten rule about what’s acceptable for on-air talent. One curly meteorologist told her she had to straighten her own hair because she was told it would create a halo on the green screen.

“I think it’s something everybody believes, but I’m not sure if it’s true,” says Hamilton. “I think minor adjustments can be made. But it’s easier to say ‘We can’t do it.’”

So when she started looking for a job, she decided to wear a straight wig – opting for a short bob.

“That was the look everyone wanted,” she says. “I decided I’d rather wear a wig than have them tell me I had to straighten my hair.”

Fox 46 called, offering her a 30-day freelance position. Within six months she was one of the station’s full-time meteorologists. She enthusiastically jumps in to help out with anchoring and interviews when needed. She feels blessed and grateful to be working in a Top 25 market.

Hamilton says she’s never hidden the fact she’s natural. On her work social media pages, she often posts photos of herself with her natural hair.

Hamilton’s natural journey began six years ago. Although many of her family and friends are natural, Hamilton found relaxed hair to be easier and didn’t think it was for her. An incident with a sew in was the catalyst she needed.

“I went to take (the sew in) out to wash my hair, and it knotted up and got matted,” says Hamilton. “I couldn’t for the life of me untangle it all. So I took the scissors to my hair and cut it out.”

Once she cut it, she began to experiment with her texture and all of its possibilities. She watched YoutTube tutorials and trying different products. Although she got positive reactions from those close to her, she was still self conscious about her new look.

“I still wasn’t sure what to do with my hair,” she says. “But the more I played with it and started caring for it, the more I embraced it. I thought ‘It’s my natural hair and it’s growing out of my head. It’s me.” 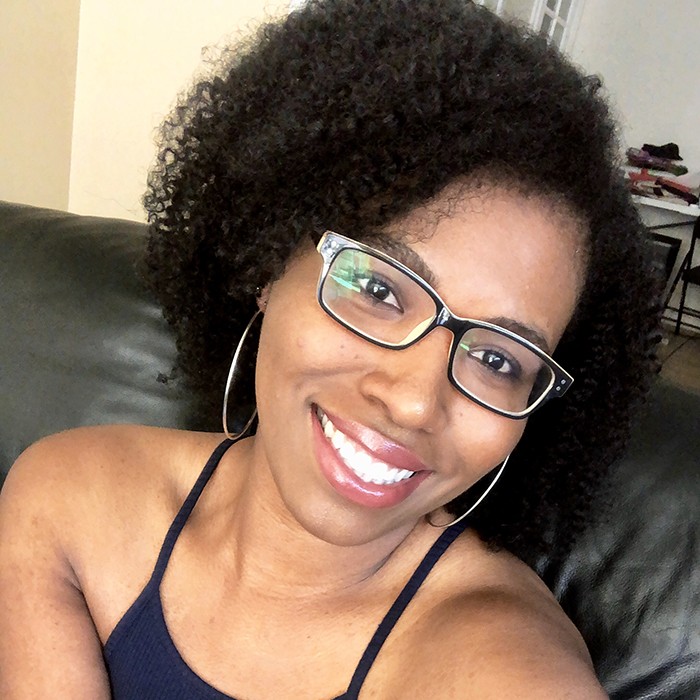 When not working, her go-to styles are braid outs or twists outs. Sometimes, she wears it up in a puff. And occasionally, she does a wash and go. Her Holy Grail products include SheaMoisture Coconut & Hibiscus Curl Enhancing Smoothie, Eco Styler Styling Gels - Black Castor & Flaxseed Oil and Argan Oil gels and SheaMoisture Raw Shea Butter Deep Treatment Masque, which she uses as both a leave-in and deep conditioner.

Six years after going natural, she’s only straightened her hair once. “I don’t want to put my hair through it,” she says. “I want my curls to bounce back.”

Hamilton says she’s ready to debut her natural hair on air, and feels it will send a powerful message .

“Everybody has that bob,” she says. “There’s nothing unique about it. It’s a very “TV” way of thinking. I want to break that.”

Hamilton says people at the station have been supportive, and she has talked with her news director and general manager about forgoing her wig on air. She started sending videos in front of the screen with natural hair.

“Sometimes it takes a little pressure,” she says. “I’m optimistic about it.I just think it’s a good move, and I hope they realize it.”

If she gets approval, she says she doesn’t want to make a big deal about it. She would prefer just to go on, business as usual. But she feels like it will be a monumental moment for her.

“I seriously only wear that wig at work,” she says. “ I call it my work hair. When I don’t have to put it on anymore, I’ll be fully myself.”

She says she hopes by wearing her hair natural she can send a powerful message about acceptance and representation.

“I want women – both young and old - to feel empowered and confident in how they look,” she says. “I want them to think ‘She’s doing this, she’s on TV and she doesn’t have to straighten her hair. She can just be herself, so I can too.’”