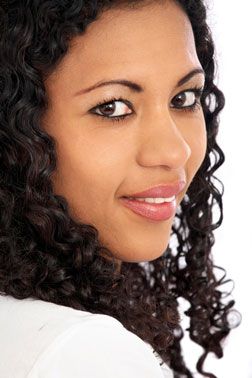 When one of the Pussycat Dolls recently spoke out about the dating dilemmas of the notoriously sexy girl group, the comments struck an oddly familiar (yet still surprising) chord in the world of single gals. Kimberly Wyatt told the UK's Daily Star, a national tabloid newspaper, that she thought men find her – and her other single members of the Pussycat Dolls – intimidating because they are strong and independent.

Well, women with curly hair are commonly stereotyped as being strong and independent. It's not insulting until the description expands to include a word that no single girl really wants to hear (or be): intimidating. When you hear it over and over again, it's annoying. It's enough to make a curly girl dizzied in frizz, especially when you're supposedly intimidating the very people you want to attract: single men!

You just don't want to believe that a man can really be scared off by a strong, independent curlyhead. Seriously, is curly hair and all it represents really intimidating to men? Say it ain't so! Love-life coaches say it depends on what you're representing. They say what really makes women intimidating are the back-off signals they send — signals that women are probably not even aware of when they're on a date.

"I don't think that it has to do with curly or straight hair," says Julie Ferman, founder and CEO of Calif.-based Cupid's Coach. "I do find that women who are masculine in their presentation and pushy, though, they don't tend to get second dates. But if a woman is soft and feminine and that's how her physical presentation is, in romance she's going to do much better. She needs to let her hair down and wear something that shows that she's a female."

Matchmaker Lisa Clampitt, president of New York's VIP Life, agrees. "If a woman has a really wild, untamed curly hairstyle, that's representing something in her personality that is demonstrated by her hair," she says. "But it's not just the curly hair, it's also the statement she's making — it's a part of fashion. Our hair is an accessory representing who we are and how we want to represent ourselves."

Women who come across as open, friendly, non-judgmental and communicative, with a little sex appeal mixed in, will fare the best when looking for love, according to Clampitt. On the other hand, women who emerge from one too many breakups with a sense of entitlement, a hardened heart, no smile and closed body posture will indeed scare off (read: intimidate) men, she says.

As for hair? Curly or straight, it has little to do with the intimidation factor, according to Paul Falzone, CEO of The Right One/Together Dating, a nationwide matchmaking service.

"I think women need to be feminine and show their femininity to show that they're a sexy, wonderful individual to be a partner with, but I cannot in any way fathom that curly hair is going to scare a man away," Falzone says, "I think the stronger a woman is, the more confident a guy she's going to get."

In fact, dating coaches say don't bother wasting energy to hide your strength or success. Instead, focus your efforts on allowing your femininity to show, which is a "huge" factor, says matchmaker Julie Paiva, founder and CEO of Calif.-based Table for Six Total Adventures.

"When a woman goes on a date, she needs to discard the corporate attitude that got her where she is financially and professionally," Paiva says. "She should let her hair down, put on some dangly earrings, strappy sandals, and some lip gloss and not be afraid she's playing games. Rather, that's showing her authentic femininity and it's authentic to be sexy as a woman."

Dos and Don'ts To Make it To A Second Date

Feeling unlucky in love? Try these matchmakers' simple rules to send flirty (not fearful) signs that will get you to a love connection.