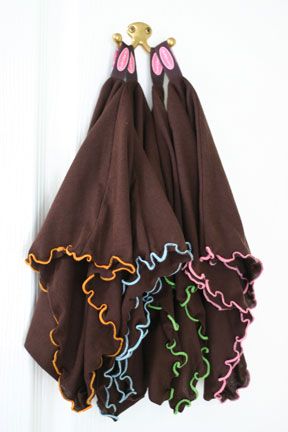 Curls Like Us Curl Cloths are beautiful and practical.

When Karen Piotrowski visited her first curl salon in New York, she was thrilled by the experience. She was especially intrigued by how the salon used paper towels to enhance curl formation, but thought there must be a better way to get the same effect without going through rolls of paper.

So Piotrowski, a veteran hair-care marketing and product development guru, began using old t-shirts instead. But she soon realized that all t-shirts were not created equal, and she wasn't thrilled at the site of an old t-shirt slung over her shower.

"I thought that there must be a way to come up with a product that achieves the same effect but also looks good," says Piotrowski, whose once-stick-straight locks turned curly during her teen years.

That's how she came up with Curls Like Us Curl Cloths. The patent-pending design of the styling cloths was developed to set curls for optimal shine and definition.

"I developed this product because I needed this product," she says of the curl cloth, which she introduced in January of this year. "I spent a lot of time working with companies to come up with products for them. This time, I developed a product for me."

Piotrowski, who lives in Sandy, Utah, says she became a textile expert in her quest to come up with the perfect styling cloth. She discovered that t-shirt material comes in different weaves, weights and blends. If the weight was too thick, it didn't absorb water. The Curl Cloth's weave is designed to wick away just the right amount of moisture from your hair to set the styling product properly and define curls. 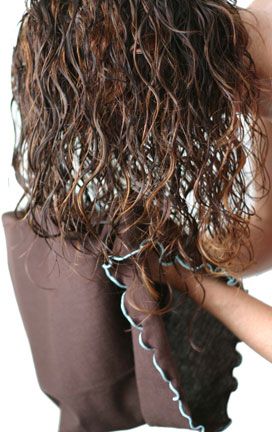 After finding the ideal weight of 100 percent cotton knit, she added a colorful lettuce edge to give it a curl look. She decided to make the towels brown to address concerns from women who color their hair. It's shaped like a tube so hands can be stuck into both ends, allowing the user to scrunch the hair upward.

She says traditional terry-cloth towels don't work because they separate the curls and roughen up the cuticle.

"Curls want to cluster and clump together," she says. "They're happy together. If you separate them, they look frizzy and flyaway. And when the cuticle is damaged, it causes breakage and split ends."

After conditioning the hair and applying styling products, gently shake the head to loosen curls, insert your hands into the Curl ClothTM and scrunch hair upward toward the roots, blotting excess moisture from the hair. Thicker hair may need two Curl ClothsTM.

Piotrowski says response to the Curl ClotTMh has been phenomenal. She initially thought she'd sell them to individuals but has gotten a lot of requests from salons who want to use them and sell them to clients.

"I have tried towels with less texture, micro-fiber towels and paper towels, but nothing works as well as the Curl ClothTM to control the frizz and assist in styling the hair," says Ann Marie Lasater, a stylist at Studio 247 Salon.