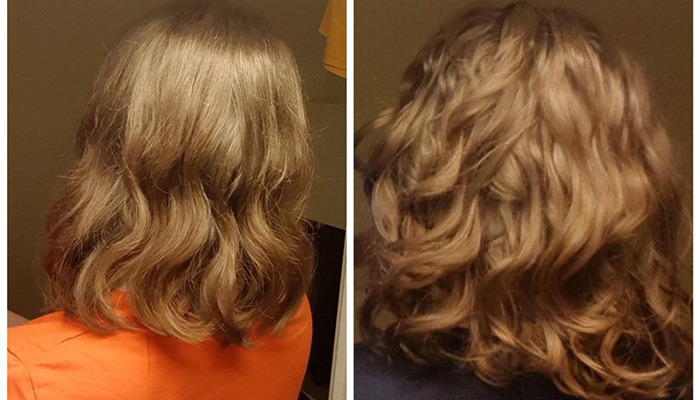 I've heard it a thousand times, and I bet you have, too. "Oh, I could never get curls or waves like that! My hair is just too blah!" People with this outlook often don't even try to work with their texture, instead relying on the flat iron for the same ol', same ol'.

CurlTalker Wildberry, however, wasn't satisfied with that approach. Though she was skeptical, she suspected there may have been some texture lurking in her locks, just waiting to be pulled out.

She needed a wavy transformation. Even if she wasn't looking for 3c curls, she was definitely fed up with frizz.

"I was Googling how to get rid of frizz, and everything I found was related to curly hair," she says. "I decided I might as well see if the curlies had some tips and tricks that would work on straight hair as well. That's when I learned I had wavy hair, and some 'wavy' Googling led me to NaturallyCurly."

Wildberry, who lives in Norway, north of the Arctic Circle, dug into NaturallyCurly and CurlTalk, absorbing as much information as she could.

She posted on CurlTalk in mid-January, and received support and advice from a number of other CurlTalkers, including Guide 65 and SavageGirl.

She put her newfound knowledge to work right away. "I used the SheaMoisture coconut and hibiscus line since that was easily available online, even to a European," she says. "I had also read it was a great way to start because it works well on most people."

She says she started with the shampoo, conditioner, and gel only. "In the shower I used squish-to-condish, and when my hair was dripping wet I put the gel in it and did some more squishing."

She then plopped her hair for 15 minutes, and "once dry, I scrunched out the crunch," she says. "Voila!" A wavy transformation!

She came back to CurlTalk to report on her progress: "I think it looks more healthy than before, even after just one week."

Even though Wildberry saw a quick initial turnaround in her hair's condition when she first started the no-poo method, she is realistic about the long-term investment she will need to make in her hair.

"Natural waves is all about letting the hair go wild, and I have spent my entire life trying so hard to control my hair," she says. "It's a lot to get used to."

Like many of us, she isn't yet 100% satisfied. "It feels like it gets weighed down and/or frizzy very quickly, and much more oily on day two than I'm used to," she says.

"I am still experimenting, but it's a slow process."

Living outside of a major trade center complicates matters, too. "I order something, wait for it to arrive, which usually takes around 2 weeks," she says. "Then I try it out, test different ways of using it, and if I'm going to order something else, it takes time to get the products."

So the experimentation continues, with new techniques and products — all in search of that holy grail combination we're all looking for.

Ultimately, she says, "Nature seems to know what it's doing, because it suits me a lot better than 'straight' hair ever did, so I like it better than I ever have!"

Wildberry is definitely pleased with the progress her hair has made so far, loving her wavy transformation: "I'll sum it up for you: Hair good, me happy!"

We know there are a million stories like this out there; what's yours? Please share in the comments section below!