Can We Talk About Miss Jamaica's Formal 'Fro? 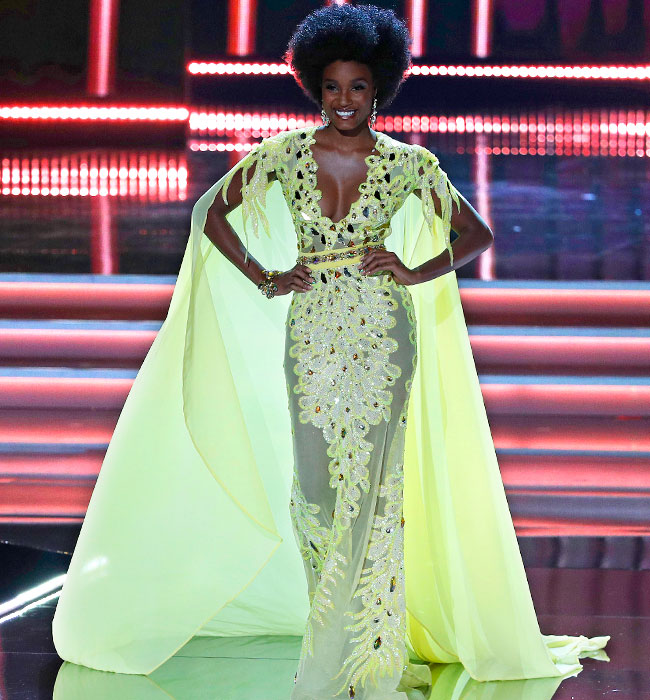 Can we talk about Miss Jamaica 2017 for a minute?

#MissJamaica is the @MissUniverse in my eyes regardless. Congratulations beautiful Jamaican Queen ✨✨✨ pic.twitter.com/0p3dGTvGKL

As far as Black Twitter is concerned, better than any other group, yes.

Being an all Caribbean, half-Jamaican woman myself, first of all, she was family from the jump, so even if I do have a few qualms about pageants, I'm already celebrating the fact that MY PEOPLE made the top 3. And I'm celebrating even harder because through each round of the competition, Davina Benett was rocking a gorgeous, perfectly shaped afro, and she. Was. KILLING IT.

Question: What should I do with my natural hair for a really important occassion?
Miss Jamaica: Wear your God given crown. #Missjamaica #jamaica #missuniverse pic.twitter.com/wVFWH7swYv

Although the natural hair movement is growing strong, ba-dm-tssh, formal occasions are often considered the time to sleek even the coiliest hair back, up, and into something that, while it may very well be another traditionally black style, is anything but our plainly combed hair. The first reaction of many black women, myself included, when confronted with an event that mandates formal evening wear is to reach for the edge gel, not the pick. But it doesn't NEED to be that way.

To put it bluntly, even though she didn't secure the crown outright, Miss Benett is making revolutionary moves in putting another darker skinned, coily haired woman at the forefront of an industry of beautiful people. Hey, Lupita can't carry that load all by herself, right? And you KNOW Alek's ready to share that load.

It's fine! There's a little black girl out there with an afro who now KNOWS that she can do it! #Jamaica #MissUniverse #MissUniverse2017 #MissJamaica

...don't worry, I'm punishing myself for my terrible patois more than y'all ever could. Dad reads my work, so I'm expecting a call as well. But on the brighter side for now, Black Twitter was understandably abuzz with all of the wonder and afro-inspo (frospo?) that you'd expect, including a lot of wonderful wide-eyed discussion about our simplest style being just as chic as something more elaborate. And this 'loss' was even met with a silver lining I didn't see coming at all:

Did Davina #MissJamaica really “lose” or did she just get a global platform to display her stunning beauty and bold personality which will now allow her to pick, choose and refuse major opportunities without the obligation of #MissUniverse duties? #StayWoke #BrightSide 😉 pic.twitter.com/VfNgyLLLdD

What do you think, coily curlfriends? Would you wear an afro to a formal event? Have you already? Let us know below, and DEFINITELY tag us @naturallycurly so we can catch some of that shine.