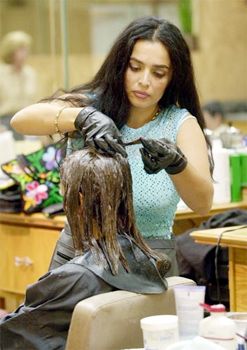 Sherry L. of Puntagorda, Fla. was looking for a change when she decided to try thermal reconditioning last April.

After a two-hour drive to Fort Lauderdale and seven hours in the stylist's chair, she had a shiny, stick-straight bob that 'felt like a Siamese cat.'

"I've never been able to run my fingers through my hair before," said Sherry (Curltalker Meezer).

But her enthusiasm was short-lived. She recalls looking around her in class one day and seeing curly hair everywhere. The only way she could get any curl back into her hair was by dousing it with hairspray and using a curling iron. Her once bouncy ponytail was flat and limp.

"I just paid $600 and all I see is people with curls," she recalled. "I felt like I wasn't myself anymore."

So in June, Sherry snipped off close to five inches of hair, leaving a chin length bob. By September, the rest of the straightened hair had been cut off.

"It definitely gave me a new appreciation of curls,' she said. 'In my opinion, the only people who should do this are people who already wear their hair straight every day, because there's a very good chance you'll miss your curls."

Thermal reconditioning, a Japanese hair-straightening technique introduced in the United States a few years ago, has taken the country by storm. For many curlyheads, it has been a godsend, enabling them to achieve their desire of having silky straight hair. For many, it has been a life-changing experience.

"It's the world's greatest thing for curly hair," Rachel Marinos told the Seattle Times in November. "I love it more than Christmas and my birthday."

The treatment manipulates heat from a special iron to restructure the bonds in the hair and change the shape of the hair follicle so it falls completely straight. The top three methods use roughly the same procedure: relax the hair, apply proteins and conditioners, flatiron it straight and apply a neutralizing solution.

It takes three to six hours, depending on the length of the hair and how curly it is and can last six to eight months, although some women require retouches every few months. The cost ranges from $250 to $1,000.

"I'm not anti-TR," Sherry said. "It's an absolutely amazing solution for people who wear their hair straight."

But it's not for everyone. It's expensive. Upkeep can be more than some bargain for (curly regrowth can look strange with the straightened hair). It's permanent (once it's straight, it's straight until you cut it off). It may not work well on very coarse or kinky hair. If applied wrong, the chemicals can cause damage and breakage. One New York stylist has nicknamed it the "Hiroshima Hair Treatment."

And for some, their new stick-straight hair has left them longing for their curls.

"Part of your personality is associated with your hair," said Monica of New Jersey. "I miss my curly hair."

Monica had the process done this year ago after a hairdresser blew her 3a curls straight. Up until then, she always had worn her hair curly. She loved the look and got haircuts that suited her straight hair. Thermal reconditioning seemed to offer the perfect way to get the straight look easily.

But it's been more difficult than she expected. She never realized her hair was fine until it was chemically straightened.

"When it was curly, I had a lot of hair, a lot of body,' she said. 'In the beginning it was really, really flat. It doesn't necessarily suit my long, thin face."

Another problem has been the split ends that show much more clearly with her straight hair. "You can see every imperfection," she said.

And it takes her a long time to make her hair look good — something she was unprepared for.

When it was curly, I just jumped in the shower, washed it and let it dry naturally," she said. "Now it doesn't look good unless I style it."

For those who opt for thermal reconditioning, stylists have several suggestions to make sure they're happy with the results.

Those who do it should be prepared for the dramatic change it will make to their overall look.

Veteran stylist Antonio Soddu, founder of the Curl Friends and co-founder of the Bumble and Bumble product lines, suggests those considering thermal reconditioning blow their hair straight for two weeks to see how they like it.

"Once it's straight, it's straight," Soddu said. "If you want it curly again, you have to grow it out." Once you've had the treatment done, treat it with tender loving care.

In the December Allure, hairstylist Mayumi Nakashima of New York's Peter Coppola Salon recommends those who have had thermal reconditioning wash their hair infrequently (two to three times a week), air dry when possible, use a natural-bristle hairbrush and protective conditioning spray when blowdrying and deep condition the hair once a month.

Ouidad recently introduced a new deep conditioning treatment designed for the type of damage caused by such processes as thermal reconditioning. Damage Control — 'a curl recovery system' — is formulated with vitamins A, B6, C, D, E, K, folic acid, botanical extracts, powerful proteins and Methyl-Sulfonylmethane, a naturally occurring sulfur compound mixed with Aloe-Vera. The conditioner is designed to stimulate and moisturize damaged hair, restoring the original shine and luster. The treatment must be applied under professional supervision.

And for those who don't want their hair completely straight, there are many other options, ranging from relaxers like Rusk Anti-Curl to reverse perms.

Christo Fifth Avenue, for example, offers the Curlisto Bio-Softening treatment to loosen curls and add shine. He uses a blend of botanical extracts, conditioners, amino acids and proteins in the formula, which is applied on dry, sectioned hair for 60 to 120 minutes, depending on the length and thickness of the hair. The cost ranges from $300 to $500.

The salon's Bio-Reconditioning treatment is halfway between Bio-Softening and Thermal Reconditioning and uses minimal heat to loosen ultra-tight, frizzy curls.

"It still gives you the option of having curls when you want them," Cypriano said. "It's less drastic."

And finally, the salon does do thermal reconditioning as well, but only after a consultation.

"We make sure that the person who wants their hair straightened is 100 percent sure they want that look for a year," he said. "If I see they're a little hesitant, I offer our two other options and leave it up to them to decide."

For Valerie (Curltalker ValerieW) of New Jersey, thermal reconditioning has been a mixed blessing. When she first had it done, she loved the results. But despite what she had heard, her hair wasn't wash and wear. She had to blowdry it to get her hair shiny and straight. And as it grew out, it looked dry and damaged, prompting her to do the process again.

"I really didn't want straight hair," she said. "I just didn't want frizzy hair. It's been two years and I miss my curls."