The Best Moments from the 2018 Grammys

The Grammys is known for celebrating some of the most creative, fearless and passionate musical artists in the industry. It's also an opportunity for celebrities to use their voices and shine a light on important topics that are going on in the world such as inequality and politics. This year artists, executives, and producers put a symbolic twist to support the #MeToo movement by accenting their outfits with white roses or simply wearing all white. From the most fabulous fashionistas to the top performers of the night, here are the moments we lived for at the 2018 Grammys.

Best Look of the Night goes to... 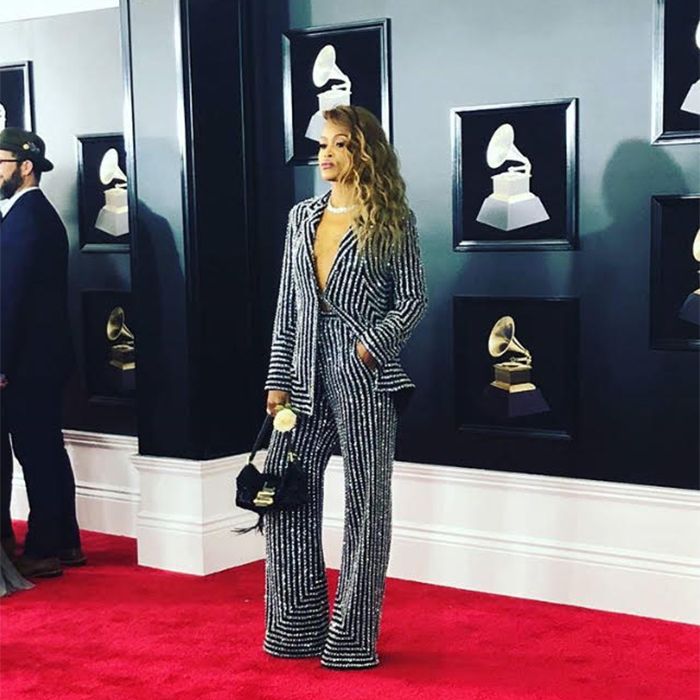 Though everyone brought their A-game, Eve took home the gold for best dressed in my opinion! The female hip-hop legend rocked a crystal pinstriped suit by Naeem Khan and reminded everyone why she's the ultimate Queen, it's so stunning and bossy!

From Blue Ivy to Cardi B, these were the best moments of the night.

Cardi B had an outstanding year in 2017, becoming the first female rapper to be #1 on the Billboard singles as a solo female artist. All her hard work paid off this year and she was nominated for two categories, best rap song, and best rap performance. Though, she didn't win, she graced the red carpet in an angelic white gown by Ashi Studio. What I love most about her is her authenticity and personality, such as this red carpet moment where she is sharing how excited she is to be at the Grammys!

Clearly, Cardi B is on fire and continues to dominate the music industry with her huge personality and catchy lyrics. She performed her latest feature Finesse with Bruno Mars and it was everything! From the 90's aesthetic to the upbeat dance tunes, it had me dancing in my seat and yelling yassss as she owned the night effortlessly. Speaking of Bruno Mars, he took home 3 Grammys and though I love his music, swag and curly hair - I'm not sure he should have won all of those categories. Honestly, I really thought Jay-Z would have won album of the year, but that's merely my opinion.

Rihanna, DJ Khaled and Bryson Tiller performed their mega-hit and my favorite song of 2017, Wild Thoughts. From the nostalgic hairstyles to the fierce dance moves this was by far the best performance of the night in my opinion. Not to mention all the facial expressions Riri served was priceless. Werrrkkkk Riri!

Jay-Z and Beyonce rocked all black and literally snatched out souls, per usual, but who really caught our attention was Blue Ivy. The older she gets the more her personality shines. While sitting in the audience she was caught telling her royal parents to chill and remain calm, and it was seriously the cutest thing ever. We know who runs things in the Carter household ;)

The overarching theme was standing in solidarity with the #MeToo movement and reminding everyone that #TimesUp for pay inequality, sexual harassment, and discrimination. Janelle Monae shared an inspiring speech about the power of uniting and rising up against those barriers that society and others try to place on us. She introduced Kesha who had the most powerful performance and was joined by several women on stage including Camila Cabello, Andra Day, and Cyndi Lauper to name a few. In the climate of the #TimesUp movement and Kesha sharing her story about sexual abuse from her manager, this was a timely and much-needed reminder, that we are so much stronger together and have the power to create safe workspaces for all.

What was your favorite moment from the Grammys? I'd love to hear your thoughts in the comments below.

Did you notice that most curly hair women decided to go straight? Read more: Where Were the Curls at the Grammys?