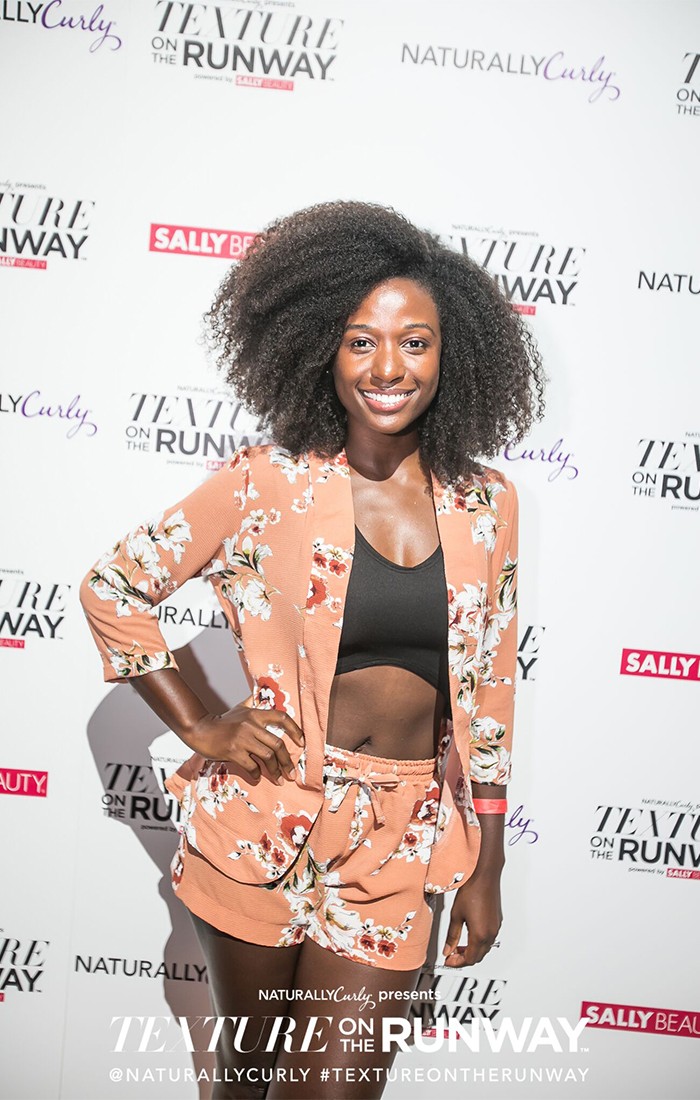 Even though Texture On the Runway has ended, we're still on a high from all the love and support we received from each and every one of you who showed up and showed out. From the amazing attendees to the fierce brands who truly showcased what it means to present, this was definitely our biggest event yet. In case you missed the show, we tapped Wendy to find out what her most magical moments were from TOTR, keep reading to find out.

What was your favorite part of Texture On the Runway?

I had a lot of favorite parts honestly, but one thing that stood out to me was definitely Lisa Price rapping for Carol’s Daughter. I’ve met her so many times and I’ve never seen that side of her. I loved how all of the owners were so involved with the whole entire project. You could tell because they came out on the stage and they were in the show as well. It was awesome to see great pride. Also I really enjoyed SheaMoisture’s live reggae artist; I literally took my jacket off because I was dancing so hard. I would say my favorite part overall was Mielle Organics. Her team was wild and the models were like different powerful animals like jaguars and lions and they were fighting for the crown. I paid special attention to the end when she gave them all crowns — there’s enough to go around, we all can be queens and we have more power and opportunities when we work together. I loved the overall message of the entire show. And of course the goody bags were just off the hook. I’m always in for a good goody bag.

Are there any products that you’re excited to try from the goody bag?

My sister and best friend were there and they’ve been telling me how much they’re loving the Camille Rose Oud Rich Infusion Moisture Treatment that came in the bag. My sister actually called me because she has issues with her edges and keeping moisture and she’s literally raving about it, so I’ll have to try that.

Were there any looks that you saw on the runway that stood out to you?

I did like when SheaMoisture brought someone I follow who has dreadlocks on stage, and I really appreciate the diversity of their products. Her hairstyle was really cool. It was a mohawk, and her dreads are down to her tailbone and they were able to create a mohawk with it. That was awesome to see.

How did you feel watching the show?

One word: inspired. First of all, you get to meet people you probably stalk online, which is cool. You get to have conversations one on one and see that they’re real people; they’re the same as you. They’re just a person who has decided to follow this path, be consistent, and you can see that in yourself and see that you can do whatever you want to do, too. Attending the show two years in a row has shown that to me. Not only do you get to speak to other influencers and people in the industry, but you get to meet the founders of these amazing lines. Meeting the co-founder of NaturallyCurly was really inspiring to see how down to earth she is. It’s a community feel that NaturallyCurly creates with Texture On the Runway because no one’s separated, no one’s on a higher plain, we’re all here together supporting and loving each other. That’s what the show is to me. I always leave inspired.

Can you describe what it's like to be an attendee?

I actually forgot that I was an influencer when I was there because I was going up to so many people there and feeling excited to meet them, so it was a surprise when people were doing the same to me!

As an influencer you probably go to other events. Is there anything you feel sets Texture On the Runway apart?

Definitely the size of the event. It’s one of the biggest events in the hair realm that isn’t an expo or a convention. It’s an event to appreciate curls – or any kind of hair, honestly – and it’s very inclusive. Pairing it with fashion is something you really don’t see. he grandness of the show is incredible, too It was way bigger this year than it was last year, and you can really see the effort in every aspect of the show from making sure people have things to drink (a lot of people don’t think about that!) making sure there’s enough room, and ensuring we weren’t hot or overheated. You could just see that every part of the event was carefully thought of and everyone was treated well. It’s one of the biggest events I go to throughout the year, and everybody is there, for real. Everybody is there — I got to meet so many awesome people. It’s really hard to compare to any other event because there’s really no event like Texture On the Runway that I’ve gone to.

Anything else you want to add that stands out in your memory of the show?

Next year I hope there’s another after-party like there was this year! I really, really enjoyed the after-show. Everyone was dancing and hanging out. That was the best finale because you had just watched an awesome show and got to meet all of your friends. Just the fact that we get to stick around and talk to everybody and not rush out was great. I saw all of the NaturallyCurly staff dancing and getting down, toasting to the achievement. I thought it was so cool to see how excited everyone was after the show because sometimes people are just stressed and worrying about things that they think might have gone wrong but the team was celebrating and it was cool to see the community.