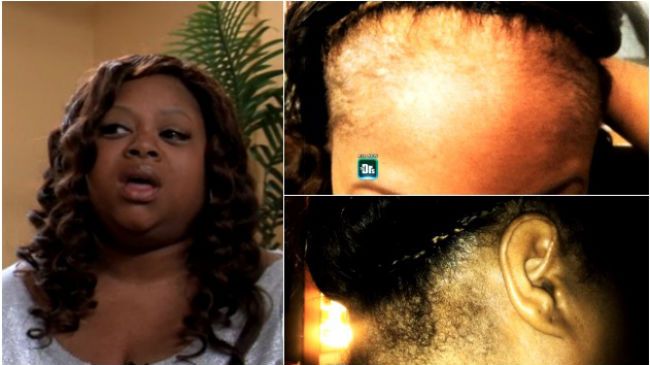 After co-starring in Moesha with Brandy Norwood, Countess got her own sitcom, The Parkers. She was on top of the world. In what would become a disastrous search for a way to wear versatile hairdos while keeping her natural hair safe, Countess erroneously turned to lace front wigs. She had not realized that every time she took off the wig, she was peeling off a very thin layer of skin. In just five years, she began to have complications. Her hairline started oozing pus; she was having an allergic reaction to the glue used to keep lace front wigs in place. Her hair began to start falling out and she now has discoloration where her hair once was. Skin under her eyes and on her ears even began to peel as a result of the reaction.

Many would prefer to use lace-front wigs instead of regular wigs because they believe that lace fronts create the illusion of the hair growing from the scalp. Celebrities such as Beyonce, Gwen Stefani, Mary J. Blige, Tyra Banks, and even actor John Travolta use lace front wigs. But what many who apply their lace-fronts at home forget is they have very well trained, professional hairstylists. And even then, professional hairstylists can get it wrong too. Just Google search “[insert celebrity] lace front wig showing.”

Countess Vaughn was one such victim but her physical reactions to lace fronts are not uncommon. Due to the harmful but very adhesive glue used when applying a lace front, many women have allergic reactions. Another factor that leads to damaging effects is the tension this places on the hairline. When all that is keeping the wig in place on the scalp is glue, this is a surefire way to cause a loss of hair. Many women have prematurely receding hairlines as a result of lace front-wigs. This of course can lower their self esteem and make the user feel self conscious. It is also counterproductive. The women who use lace front wigs as what they believe is a protective style are the same women who will end up with receding hairlines and possible infections. Unfortunately many only know this once it is too late. Countess Vaughn was very brave to come out in front of such a vain, judgmental society and show people the possible repercussions lace front wigs can bring.

Why are women so willing to go to such extreme lengths to wear long and straight or wavy, synthetic hair?

Women so often feel the need to fit into the box, one constructed by the media, they believe they belong in. Plenty of women would be perfectly fine wearing their hair natural if it were not for their husbands who say they like their hair better straight or the worry that natural hair is seen as unprofessional. Being comfortable in your own hair texture is far more important than any one else's approval.

If these possible adverse health effects do not deter you, there are things you can do to reduce the damage these wigs may cause.