My contribution for African-American History Month is to set the record straight about the straightening comb.

As many of you already know, I am no fan of the daunting steel-tooth instrument brandished by my mother whenever it was time to tame my ever-defiant head of hair.

But my hot comb hang up hasn’t tainted my preference for fact over fiction. Even though many people still want to believe that the straightening comb was invented by Madame C.J. Walker, the black entrepreneur, it was not.

I repeat, it was not. 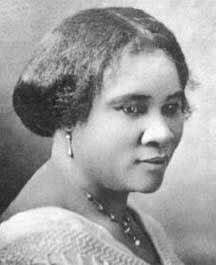 Madame Walker, who invented popular hair products, popularized the straightening comb when she started using it with the products as part of a hair care regimen that she practiced and advised.

I asked my friend and colleague A’Leila Bundles to weigh in on this. A’Leila is author of "On Her Own Ground: The Life and Times of Madam C. J. Walker." She also happens to be Madame Walker’s great-great granddaughter.

A’Leila says that Madame Walker was still a washerwoman in St. Louis named Sarah Breedlove when ads for straightening combs also known as hot combs, appeared in Bloomingdales and Sears catalogues in the 1890s. She didn’t start using the hot comb herself until around 1906.

“The fact that Madam Walker developed an international enterprise, that she provided jobs to help thousands of women become financially independent, that she was a political activist and that she was a philanthropist is much more interesting than a connection to the hot comb,” A’Leila said.

A’Leila, who gives countless speeches and interviews, still runs into people who would rather believe the hype.

“I feel like I’m playing whack-a-mole,” she says. “Some people want to believe this myth because it fits into their notion of finding a ‘villain’ for why black women straighten their hair and some people want to believe it because they're really glad someone invented an implement to help straighten hair. I just try to be as gracious as I can and let them know accurate information.”

So who is the real inventor of the straightening comb?

I cannot find a source that knows exactly who, but a Parisian named Marcel Grateau (aka Francois Marcel) comes close to being a likely suspect. In the late 1800s, Grateau started using heated rods or tongs to straighten hair. In 1872 he created a wavy style that became known as the Marcel Wave. Just like Madame Walker made millions selling her hair products used in combination with the hot comb, Grateau made a fortune using heated instruments that created his popular wave.

Now that I’ve done my part in placing the straightening comb in the right hairstorical light, I will resume my position as one who still despises the bloody thing for burning my scalp without cause!