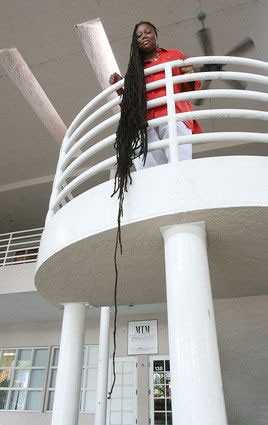 If you think it's been a long time since you've gotten to the salon, Asha Mandela has got you beat, according to an article in the NY Daily News.

Mandela, of Davenport, Florida, is hoping to win the Guinness record for the world's longest dreadlocks. It will be the first entry into a new category. To win, Mandala must have her three longest locks measured by a Guinness official and verified by witnesses. The final measurement: 8 feet 9 inches.

But Mandala will have to wait several weeks to find out if her hair is record-breaking. Guinness officials will investigate anyone else who claims to have the longest locks. Mandala says she's especially nervous about the Rastafarians of Jamaica stealing the title from her.

But with hair that's longer than she is tall, that won't be easy to do. Mandala insists that it would have been 11 inches longer had she not stepped on a strand and broken it off. Just in case people don't believe her, she carries the broken lock in her purse.

So how — and why — does one cultivate the longest dreadlocks in the world? Twenty years ago, Trinidad-born Mandala decided to stop relaxing her curly hair and cut it all off. As it grew back, she twisted it into curls and eventually into dreadlocks, which she liked so much she decided to keep growing.

But not everyone is so awed by Mandela's locks.

"[My mother] said, 'I took such good care of your nice curly hair, and this is what you are doing with it?' " Mandela tells the Orlando Sentinal. "She called it a mop for five years."

A mop would probably be easier to care for. Her locks require a bottle of shampoo and conditioner each and every time she washes her hair, which isn't often.

"I used to wash it three times a week. Now I do it once a week. It's very tiring," she says, "Sometimes I don't have the energy."

When she does soap it up, it's an all-day affair. She wrings out her eight feet of hair like a towel and must wait hours for it to dry completely. If the weather is humid (as it often is in Florida), she says her hair might stay damp all day long.

"I try not to have any errands that day," she laughs.

But despite the hassle, Mandala admits that she couldn't easily part with her long hair.

"As much as I love it, I get frustrated with it," she sighs. "But then I realize I'd feel naked without it."