The Future of Chemotherapy for Breast Cancer 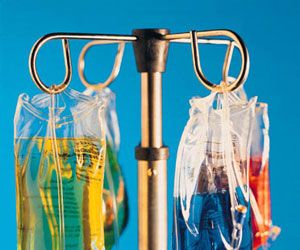 Chemotherapy has come a long way since its discovery in the 1940’s. After decades of testing this cancer-killing treatment, scientists came up with a method that uses multiple drugs to avoid cancer cells from becoming resistant, similar to the way doctors treat tuberculosis and bacterial infections. Combined with surgery, chemotherapy for breast cancer works to put patients in remission or clear them of the cancer permanently.

Science has a huge part in addressing the approach to a sensitive and risky subject, but over time, research has continued to broaden the horizons of cancer treatments including chemotherapy.  Although the history and its science is mind boggling and overwhelming, chemo in its many forms has cured previously incurable diseases. After decades of research, the questions remain: how will chemo change once again?

One problem with chemotherapy is that the drugs used for treatment are effectively poisons introduced into the body that kill more than just cancer cells. There are other treatments not including chemotherapy that work to destroy only the abnormal cells, but with chemo, that’s not the case.

In spite of new technological advances, chemotherapy will still cause the common side effects. Still, chemotherapy has changed significantly, especially in the past decade. Combined with new technology and scientific breakthroughs, chemo is less harsh than it has been in previous decades.

The cancer of the future could be the least of your worries and nothing more than a minor irritation you deal with via an over the counter prescription and a day off from work!

For chemo treatments, there might be side effects including nausea, vomiting, hair loss, and a higher chance of developing illness, conditions or infections. However,  there are several different types of chemotherapies out there. For instance, there are a couple chemotherapy treatments that do not cause hair loss. (unfortunately, almost none of those are used in the treatment of breast cancer). That being said, every chemo has its side effects, so you’ll never be completely in the clear of all the consequences of treatment.

Eventually, using chemotherapy for breast cancer may be a thing of the past. This is because researching scientists at a variety of colleges and private organizations are working diligently to find newer treatments that cause fewer side effects. Scientists who once put their efforts to developing chemotherapy are currently researching the inner workings of a cancer cell, its composition, and simply how to find and attack it alone (making the treatments available more efficient than ever). Aside from chemotherapy, there’s now targeted therapy, studies on the genetic makeups and mutations of cells, and several conclusive studies that create a positive outlook for the next generation of cancer patients.

You may lose your hair if you’re enduring chemo now, but in the future, that may not be the case. It is a hope within all of us that cancer is not only targeted and understood, but eliminated. Using chemotherapy for breast cancer may be a distant memory in a decade or even a few short years. One day, cancer may be treated like food poisoning or the common cold — something that a century ago was still causing health complications and deaths. The cancer of the future could be the least of your worries and nothing more than a minor irritation you deal with via an over the counter prescription and a day off from work!

In the meantime, while chemo is still stealing our curls, try cold cap therapy to keep your hair!

With as much support as cancer, and especially breast cancer, receives, it is my hope that this truly will be a vision come true: eliminating cancer as you would the flu.

Tell us what you think!