How the CROWN Act Impacts You 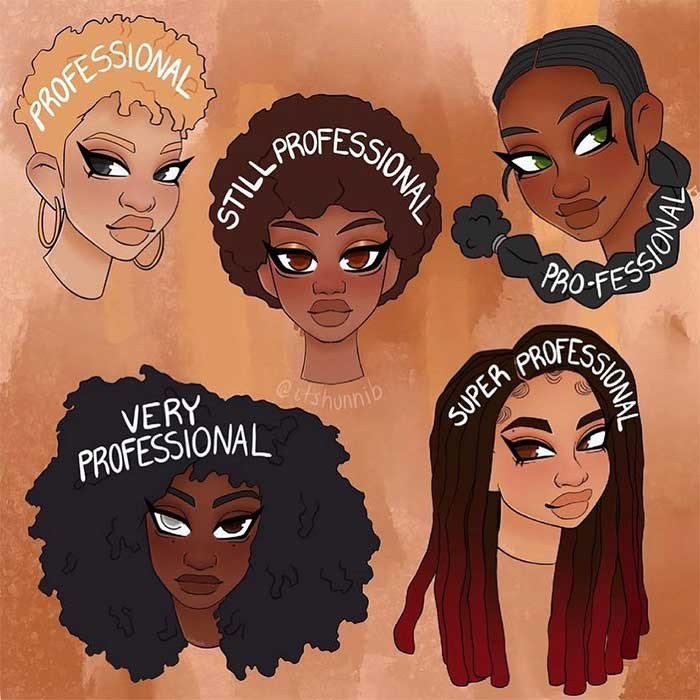 What is the CROWN Act?

The CROWN Act stands for “Creating a Respectful and Open World for Natural Hair” and is a law that prohibits race-based hair discrimination, which is the denial of employment and educational opportunities because of hair texture or protective hairstyles including braids, locs, twists or bantu knots. This historic campaign is changing the way people view hair discrimination in the workplace. The goal of the CROWN Act is to outlaw discrimination based on how people wear their natural hair in the workplace. As naturalistas we have endured decades of discrimination and shame when it comes to beauty standards, both socially and in our place of work. This discrimination has been unspoken as well as structural rules laid out in employee handbooks or school dress codes. We have seen countless examples of men, women, and children being told their hair was “too wild” or “unprofessional” because it didn’t meet the typical standard of beauty.

Since the CROWN Act was introduced and signed into law on July 3, 2019 it has expanded into a movement that creates healthy conversation around race-based hair discrimation and has been adopted by several states in the United States. Variations of this bill have been introduced in 29 states and even at the federal level.

We’re going to share the latest developments of the CROWN Act and how it will continue to impact naturalistas everywhere.

Since its 2019 inception, the CROWN Act has continued to gain momentum politically and socially as more people become aware of natural hair discrimination. Whether it was Nicole Pyles being told to remove her beads from her hair in order to play softball or Deandre Arnold being told to cut his dreadlocks in order to graduate, hair discrimination is alive and well in this decade.

Who is the CROWN Coalition?

The organizations that make up this alliance are Dove, National Urban League of Color, Color of Change, and the Western Center on Law and Poverty who have done tremendous work to educate the public regarding anti-dsicrimination in the United States. Currently in the US there are no federals laws or legislation that have been put in place to protect people against race-based hair discrimination, yes we’re serious. The efforts of the CROWN Coalition have combined their resources and brand capabilities to create an inclusive and equal beauty experience Black women and girls. This groundbreaking initiative has the power to change the way beauty is determined in the workplace and schools which could protect future generations from hair discrimination.

How the CROWN Act Affects The Workplace

Whether you have seen it on the news or been on the receiving end of ugly comments, it has been historically hard for women of color to wear their hair naturally in the workplace. While the workplace has continued to diversify itself and adopt new policies for inclusion, there are still gigantic steps that need to be made in order to eradicate the longtime stigmas that corporate America has placed on Black women and grooming. If you aren’t familiar hair discrimination laws in the US, this guide is a great resource that breaks down the historical complexities of employer grooming policies codes and natural hair.

According to the 2019 Dove Research Study, this is how workplace bias affects Black women:

Simply put, Black women and natural hair judged differently and workplace bias can have a profound effect on their self esteem and performance. Not to mention how it affects children’s feelings in school. The CROWN Coalition seeks to break this scrutiny and discrimination by championing each state to adopt the bill and make it illegal to discriminate against anyone based on their natural hair. They have currently garnered over 260,000 signatures petitioning lawmakers to end hair discrimination in the workplace and schools. This petition in addition to support from big name beauty brands like Dove has kept it in conversation and rotation with heavy hitting legislatures, but the choice to adopt the CROWN Act is done by individual states, which has proved to be its own battle 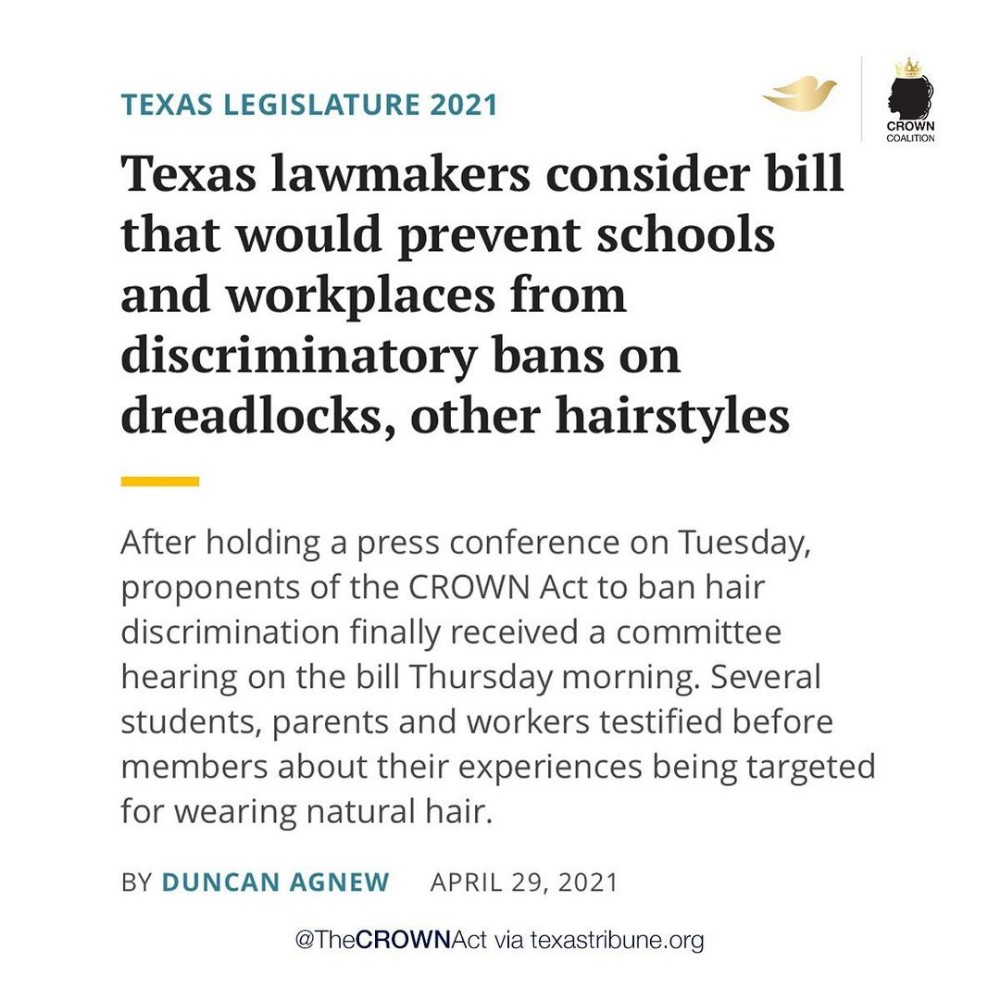 Which States Have Passed the CROWN Act?

The first state to sign the CROWN Act into law was California with Senator Holly J. Mitchell’s support of Senate Bill 188. New York was second to follow under the leadership of Assemblywoman Tremaine Wright and Senator Jamaal Bailey. This was followed by New Jersey one year after the wrestling match in which a high school wrestler’s locs were forcibly cut off.

Currently there are 13 states who have formally adopted versions of the CROWN Act as a law which makes it officially illegal to discriminate against a person because of their hair:

Tennessee is the latest state to join as people across the nation begin to request that lawmakers in their state adopt the bill. Furthermore, the CROWN Act has become las in 21 municipalities around the country, and as recently as March 2021 the federal bill H.R 2116 was introduced by U.S Congresswoman Bonnie Watson Coleman of New Jersey in the U.S. House of Representatives and S.888 was introduced by Senator Cory Booker in the U.S. Senate. If you are wondering why it’s not a national law yet, it’s because it has not been passed by the Senate, which means that as of now individual states can choose to adopt or dismiss the legislation.

Depending on the state and local laws where you live, your employer’s grooming requirements may be in conflict with new regulations or regulations that are going to be passed in the near future. If you have experienced workplace discrimination based on your natural hair in one of the states that has passed the CROWN Act you can report it to your local ACLU here.

In 2020 over 20 states considered the CROWN Act, but chose not to make it a law, which means the marathon isn’t over just yet:

What Can You Do to Support the CROWN Act?

We at NaturallyCurly are excited to support this legendary initiative to bring awareness and change to outdated beauty standards. We look forward to seeing progress and change as more states adopt this legislation. You can do your part by adding your name to the petition to help get the CROWN Act passed in more states. Their goal is to reach 500,000 signatures and they are over halfway there - we know the NaturallyCurly community can boost those numbers!

You can also send a letter to your state and local representatives using this template.

Does your employer have grooming guidelines that apply to hairstyles in your place of work? Let us know in the comments below!