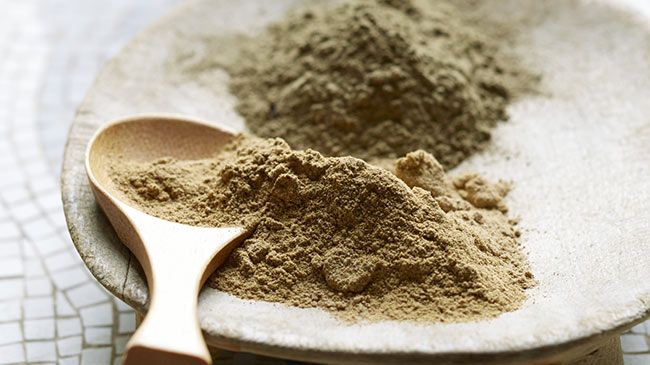 Don’t worry, there isn’t a battle of the clays going on. There is just the need to clarify (pun intended) the differences and the similarities of the two highly popular and highly nutrient-rich clays. They are being used for hair, face and body but is one better than the other?  Does one work better in your hair while the other does better for your body? It’s time to learn the differences between the two and how they can give you healthier, lovelier hair and bodies.

Rhassoul clay or ghassoul clay is a natural mineral clay from the Atlas Mountains of Morocco.  It’s been mined and used since the 8th century and has been used by Moroccan women for centuries to care for your skin and hair. The word rhassoul derives from the Arabic word for washing, “Rhassala.” It has an unmatched ability to draw out impurities from the skin and hair and is used for detoxifying, cleansing and reducing dryness. It has a reddish brown color and has been used for soothing scalp ailments such as dandruff and psoriasis.

Rhassoul clay is the moisturizer and softener.  It reduces dryness in the hair while also removing toxins and product buildup. It improve hair’s elasticity and unblocks your scalp’s pores. It reduces flakiness and aids in detangling and although it cleans like bentonite clay but unlike the detoxifying clay, it leaves your hair soft and moisturized.

Bentonite clay is composed of aged volcanic ash. It’s an impure mud that is incredibly powerful with its ability to produce an electric charge when added to water. With its charge it can remove positively charged products from the hair and body and it absorbs and removes toxins, impurities, heavy metals, and chemicals. Considered a healing clay, bentonite clay has a high concentration of minerals like calcium, iron, magnesium, potassium and silica and there are several type of bentonite clays, each named after its dominant element.

Bentonite clay is the detoxifier, the cleanser or the restorer of your hair’s balance.  It draws out the impurities and restores your hair’s pH balance and believe it or not it can be used externally or internally according to some.  It’s used in many detox and cleansing products and it makes sense that it’s used as a cleansing mask for the hair.  It draws out the dirt, impurities, and product buildup on the hair and scalp.

Is one better than the other?

No, not really. Rhassoul clay tends to be pricier than bentonite clay but they have different purposes despite both of them being great for drawing out toxins, product build up and dirt from our hair and scalp.  If you need a clay to be highly absorbent than bentonite is the one for you but if you need that extra moisture and softness then rhassoul is the better of the two for you. It matters on what your goal for your hair at that moment and neither is better than the other.

Below I have two videos by DuchessGabrielle, a believer that nature is the best consultant for any issues with your face, body or hair.  She gives in-depth information and recipes for clay masks using rhassoul and bentonite clay for your natural hair.