I don't have any current plans to loc my hair.

Currently I'm enjoying the versatility of it in its floofy form while I'm growing it out. But my plan has always been to start the loc process once the coils start coming in more silver than coal. Judging by my family, I figure that'll be in about 30 years, which will put me right at Miss Angela Bassett's age. Considering her portrayal of Ramonda, Queen Mother of Wakanda in Black Panther, I can't WAIT. 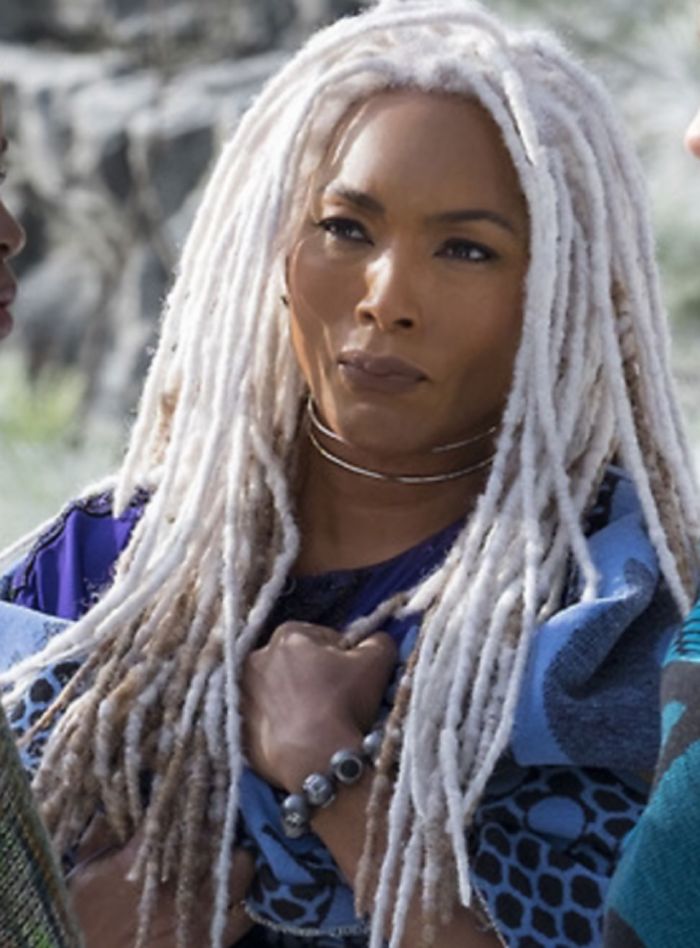 Naturally, the whole movie had me drooling over the architecture, the tech, the... ahem, shirtless fight scenes, and alllllllll the glorious natural hair/lack thereof. But Ramonda's silvery splendor really struck a chord with me.

I'm trying to avoid spoilers, but this is a pretty mild one... I think.

Because Mommy #2, cough that is to say Ramonda, spends most of the movie wearing a Zulu inspired headdress, we don't actually see her locs until the falling action that precedes the start of the climax. Shout out to Twitter user @diasporicblues for presenting the research I was intending to do for this article for absolutely free, by the way. Much obliged. Without giving too much away, I can say that there's a moment where she has to run for her life, and shed her more literal crown in order to move quickly and inconspicuously.

As inconspicuous as the beautiful Angela Bassett ever COULD be in any case. I'm an admirer, could you tell?

Fangirling aside, as I said, the first time we see her hair is when she's on the run, and those locs are just spectacular. They're like snow on the peak of a majestic mountaintop, which coincidentally is where she's headed in the film, but let me stop right there.

I got my first gray hair when I was seven as a fluke, and I have two now on opposite sides of my crown that I'm PRAYING merge together into a cool stripe as I age. But my hair goals here are actually more than just cultivating the 'Creepy-cool witch lady that lives in THAT house' aesthetic that I want when I'm older. Having tidy locs actually involves a decent amount of privilege—both in access to proper maintenance materials and in the mobility one needs to continue locking new growth. As much as I can, now I'm trying to lay the foundation for that as I'm coming up on my 30s. Right now, I think I have enough product to last me until maaaaaybe my 50s, so there's still room for expansion and improvement as far as hoarding goes. And I already know I have joint issues in my matrilineal line, so I'm taking preventative measures with exercise and swallowing my weight in collagen every day. But that combination of privileges represents the kind of woman I want to mature into.

And if I do have kids, I could definitely do worse than a spunky genius and a kind-hearted monarch.

Between Camille Friend (head hairstylist for BP) and Natascha Ladek's (wigmaker) work, I got some serious inspiration. If all goes as projected, Future April is going to look amazing. And if it doesn't, eh. We'll cross that bridge when we come to it.

What are your plans for when you go gray, curlies? Let me know, and be sure to stay tuned for our Watch n' Go coverage of Black Panther next week!