On February 16th, black girl magic and power will be projected on the silver screen as Black Panther hits theaters. The film is already anticipated to be one of the most successful of the year, and it's only February. 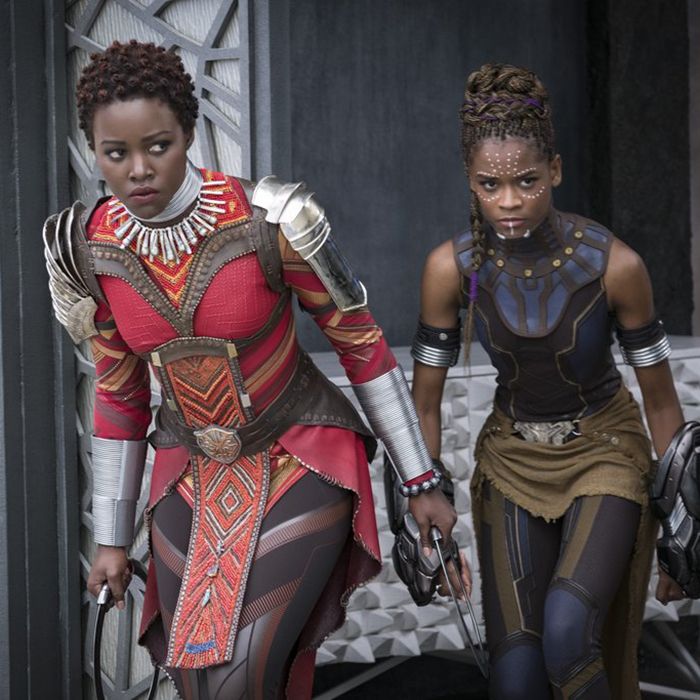 The best part of the movie, in our opinion, is its celebration of natural hair.

In a recent article, The Cut talked to Black Panther's head of the hairstyling department, Camille Friend. When discussing inspiration, she broke it down into, "three parts. For the 'traditional' look, we used inspiration from the Zulu tribe, the Maasai tribe, and the Hima tribe. Then we looked at the modern styles in the natural-hair movement. Finally we looked at the Afropunk movement, which has a lot of natural and creative styling. Also, there are five tribes in the story, and we had to create different looks for each tribe."

Actor Michael B. Jordan wore extensions while Angela Bassett's wig took approximately one month to create to perfection. "There's no press and comb in this movie," Friend told the publication. "No relaxers, no nothing! That was one of the things that I really was firm about. I requested that people come with their natural hair. People were like, 'Are you sure?' and I was like, 'Yes, I am sure! We have a qualified staff of hair people who are phenomenal and who are well-versed in natural hair.'"

Apparently, Bassett's wig, which Friend refers to in the article as the pièce de résistance wig, was handmade and blended with four various hues. Her hairstyling for Black Panther required faux locs -- 110, to be exact -- and the entire process took four weeks to complete.

Jordan's hair, on the other hand, was grown out when he got the part of the main villain in the film. "He has dreadlocks," mentions Camille. "We wanted to give him a look that you've never seen before, and since he is the villain in this story, we wanted him to look strong and bold. He grew out his hair because we didn't know what we wanted to do with his hair, at first. We eventually decided that we wanted to dreadlock it and keep the sides faded and really short. It's a great look and he's really sexy. We added extensions to it, but he did start out with a good amount of hair, and that's why it looks so natural."

The hairstyling department was all about natural hair maintenance; the talent received regular shampoos, conditions, and oil treatments to promote hair health in their curly, coily and loc'd hair.

Even heat was (mostly) off-limits while on set. Camille notes, "We like everyone to dry naturally. Occasionally we used diffusers, but most of the time I really tried not to."

As if we weren't already totally giddy by Black Panther's recent movie premiere -- hello, Lupita and Angela, please open your special occasion closets to us, thanks -- the latest interview with the film's head of hairstyling department definitely left us geeking out even more in preparation to receive all of the natural hair lewks in two weeks when it hits theaters everywhere. Any workplace that is heat-free and relaxer-free is good in my book.

Will you be seeing Black Panther with us?

Let us know below. I'll be seeing it on opening night. Follow me on Instagram (@devrivelazquez) and stay tuned for my reaction video!

Watch Evelyn react to the Black Panther Trailer to get even more hyped up.

Read my article, Afropunk Reminded Me That My Blackness Is Majestic