Back in 2000, author Trisha R. Thomas penned a novel that, for the avid fiction reader, was both delightful as well as being the kind of book that provided a lot of food for thought. It was titled “Nappily Ever After“ and it was the story of Venus Johnston—a woman who had it all. A great job. A wonderful live-in boyfriend. And long, flowing hair. Long, flowing, chemically-processed hair, that is. 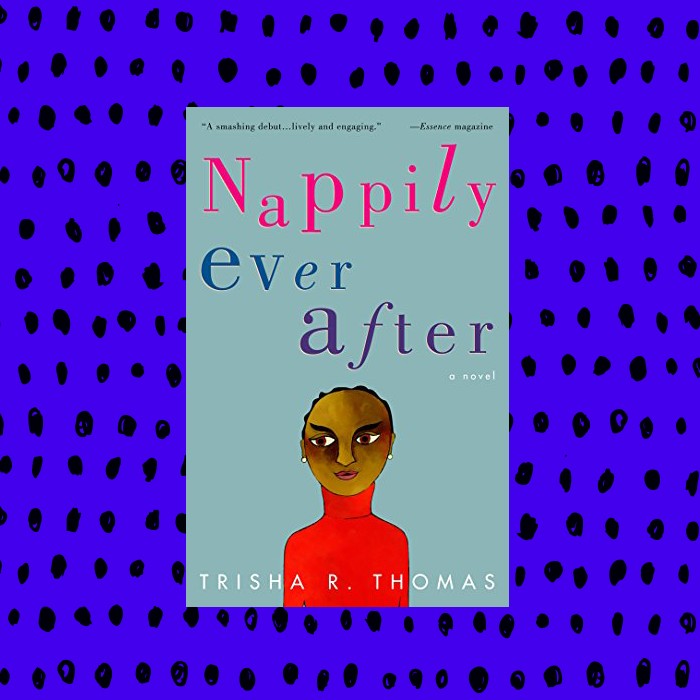 Yet between the chemical burns, hundreds of dollars spent, and countless hours wasted in the salon over the years, one day, Venus decided to do what many of us call “the big chop”. From that point on, Venus realized that her decision was more than simply a change in her hairstyle.

What the book so eloquently—and humorously—does is walk us through all of the transitions and ah-ha moments that Venus experienced, both externally and internally, once she was rockin’ uber-short natural hair. There were highs and lows, good times and bad. But the last paragraph of the novel sums up the relevance of her hair journey—“I’ve never been introduced to it, true love. The true love that could only come through the love of oneself.” Powerful.

Fast forward to almost 20 years later and this novel has become a made-for-the-movies feature on Netflix. It stars (among many others) celebrated actors Sanaa Lathan and Lynn Whitfield and is slated to make its premiere on Friday, September 21.

Even if you didn’t know about the book (which is worth getting a copy of and reading, even all these years later) or somehow you missed all of the pre-press surrounding the film, you might’ve caught headlines like our own "In Case You Missed It: Sanaa Lathan Shaved Her Hair!" and People magazine’s “Sanaa Lathan Shaves Her Head for New Role: 'I Feel So Light'” last fall. It features both before and after photos of Sanaa before she had her own big chop experience in preparation for her lead role in the movie (in the movie adaptation, Venus Johnston is now Violet Jones).

In fact, if you happen to be a huge Sanaa fan, you might find yourself thinking that this particular role was somewhat foreshadowed by another movie that she also had a lead in—”Something New”. Back in 2006, Sanaa’s character (Kenya McQueen) met a man who inspired her to remove her long hair extensions, in exchange for the soft waves of her shoulder-length bob that was “hiding” underneath. The change sent the message that natural comes in many forms and, in every single one of them, natural is beautiful.

In many ways, the message of “Nappily Ever After” is no different. In the trailer, Sanaa’s character says something that so many of us can relate to, whether we initially realize it or not—“My hair was like a second job. Now I’m forced to focus on myself.” What she wants out of her career. What she wants in love. Who she desires to be and become. (Another great Sanaa read that echoes this sentiment is "The Real Reason Sanaa Lathan Buzzed Off Her Long Hair".

Although TWA and all forms of natural hair are stunning in their own right, you don’t get the impression that the movie is a PSA for naturalistas. Instead, it seems the film is simply a cinematic way of reminding us that our authentic selves are beautiful, valuable and important; that whether it’s for personal or professional reasons, we should never hesitate to let who we truly are shine through.

If for no other reason, reading a book or watching a movie that reminds us of this very thing is a good enough reason to curl up on a couch and check it out, don’t you think?

We couldn’t agree with you more.

Check back next week, when we’ll update this article with some reviews. Follow us on [Instagram](https://www.instagram.com/naturallycurly/) and [Twitter](https://twitter.com/naturallycurly) to catch our reactions live this weekend! If you catch the Netflix movie, tell us what you think in the comments section, below.

It's hard to cram entire books into films. If you're a fan of the novel "Nappily Ever After," it is no exception. That doesn't mean you won't enjoy the movie, though. It's cute, it's sweet and more than anything, it's totally relatable.

Whether you've read the book or not, even whether you've experienced "the big chop" (the transition from relaxed to natural hair) or not, there are moments Violet has—with both her hair and her personal life—that are oh so real. Seemingly, by design, her hair parallels her life.

For years (decades, really) much of Violet's world was controlled by her hair—not being able to go swimming as a child, being leery about cooking due to the humidity in the kitchen, being obsessed with outside weather and not allowing her boyfriend to "enjoy her hair" during throes of ecstasy—until one day, while in a drunken stupor, she took some clippers and shaved it all off.

From there...new growth (pun intended) begins because Violet discovers what she wants instead of allowing what's been expected of her to have a greater voice.

There are scenes that will make you smile and there are definitely moments that will make you "hmph" in agreement (like when she said, "My boyfriend didn't give me a ring and so I shaved off my hair" to a cancer recovery group that mistook her for being a survivor because her head was bald). Indeed, her journey with her hair is told very clearly. In fact, the only thing that seems a bit ambiguous is the last five or so minutes of the film. (Who does she break up with? Who does she end up with?)

Sanaa has always been pretty thoughtful with her movie selections and this is no exception. Apparently, it affected her so much that she has remained natural and we love her for that.

It's almost like a hair documentary and romantic comedy all rolled up into one. And who can be mad at that? Watch it. Save it for your daughter. It's a cinematic reminder to love yourself—including your hair—no matter what.