These are the Top 10 Herbs for Hair Growth 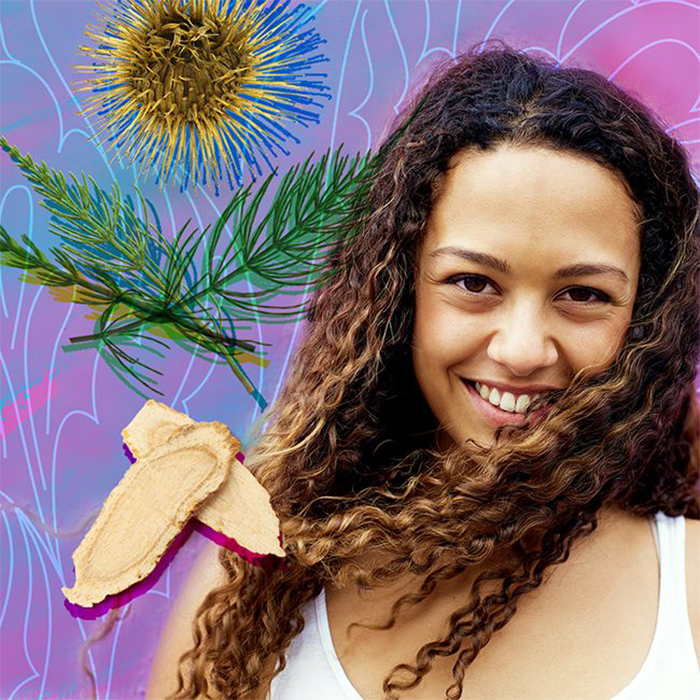 There is no denying that nature has been a source for beauty solutions since the beginning of time. Herbs are a natural way to treat a variety of ailments from an uneven complexion to a dry scalp. But herbs can also aid in your hair growth hair goals! Here are the top ten herbs for hair growth.

This herb is known to stimulate blood flow and improve circulation. It can help with increasing the blood flow follicles need to encourage new growth at the root level. It can be used topically, but is more commonly used in the form of a tea since the benefits are attainable through digestion, as with most herbs. It can also be taken as a supplement and is especially useful for people suffering from deficiencies that affect the follicle. According to research published in International Journal of PharmTech Research, this herb leads to "hair regrowth, through combined effects on proliferation and apoptosis of the cells in the hair follicle thus suggesting potential as a hair tonic."

Often used as an oil, either combined with olive oil or by itself, this herb can help with circulation to aid in growth. It has the added bonus of stopping premature graying as well! It is also super moisturizing so it can be used to treat a dry, flaky scalp which may stand in the way of new growth occurring. One study published in Phytotherapy Research Journal found that the topical use of rosemary on mice showed an improvement in hair growth by blocking excess testosterone production.

Peppermint is another herb that offers healing to the scalp to help with growth. It not only moisturizes and soothes an irritated scalp, it also stimulates hair follicles. A healthy scalp is the bedrock of hair growth so don't underestimate herbs that work solely to heal the scalp as a means of growth. This herb is often used as an oil applied directly to the scalp, as an ingredient in hair products like the EDEN BodyWorks Peppermint Tea Tree Conditioner, but may also be consumed as a tea. According to a Toxicological Research study performed on the use of peppermint oil for hair growth, the results show that by the end of four weeks, 92% of patients showed hair growth.

The gel of this plant is often used in stylers, like the Curl Theory Gel Styler . The gel can restore the pH balance of the scalp which helps to encourage growth. It is also a great way to moisturize and define your hair since it is super hydrating. You can apply this gel directly to the scalp and massage for the best results or create an aloe vera rinse. The International Journal of PharmTech Research reports that aloe vera "gel is used traditionally for hair loss and for improvement in hair growth following alopecia."

One of the lesser known herbs, this is actually one of the most widely used in hair products. It is known to improve the strength of hair, as well as bones, thanks to the ingredient silica. It also helps to make hair less brittle to retain hair which is great for hair loss. It can be taken as a supplement or used in a product that already has it as an ingredient. It is important to drink plenty of water with this herb since it is a diuretic. University of Maryland Medical Center reports, "Be sure to drink enough fluids when taking horsetail preparations by mouth."

This popular herb has antibacterial properties so it will leave the scalp free of anything getting in the way of generating growth. If your scalp has a lot of parasites, fungus, or other less than desirable things, it will be almost impossible for growth to take place. This herb is commonly used as a topical in the form of an oil, but can also be made into a tea. Additionally, many hair care brands incorporate lavender into their products, like JessiCurl. According to University of Maryland Medical Center, "In one study of 86 people with alopecia areata (an autoimmune disease that causes hair to fall out, often in patches), those who massaged their scalps with lavender and other essential oils daily for 7 months experienced significant hair regrowth compared to those who massaged their scalps without the essential oils."

Packed with essential fatty acids and phytosterol compounds, burdock can help with an irritated scalp while also reversing hair loss. It can help generate new growth thanks to these two elements, and is often found in many hair care products aimed at restoring hair. In fact, the fatty acids in this plant can even be used to treat psoriasis. University of Maryland Medical Center reports that in a study of 40 people with psoriasis, those who took fish oil rich in the same fatty acids found in burdock with their prescription medications had better results than those taking just their medicine.

This herb helps block the over production of DHT which leads to hair loss. While it may not create new growth, it does stop hair loss while helping to restore balance to the hormones that create hair growth. It also has strong antibacterial properties. A study, published in Phytomedicine and Therapeutics Journal to determine this aspect of stinging nettle, found that this result, "may be attributed to the presence of agglutinin, a lectin, and other active compounds in the plant."

Another herb commonly found in hair care products, this herb is known to stimulate the circulation needed for hair growth. It can also work to make strands stronger to help with retention of hair. A study conducted in Europe PMC, shows that ginseng extracts have a positive effect on recovery of hair follicles.

Working to stop the imbalance of hormones that stand in the way of growth, this herb is similar to stinging nettle. In fact, for the best results, you can combine the two together as a topical to get better results at both stopping air loss, and improving growth. It also works to control overproduction of DHT. According to this study, "Saw Palmetto extract inhibits the binding of DHT to receptors, thus blocking DHT's action and promoting the breakdown of the potent compound."